Home » FAQs » Conditions Procedures » What is a Hip Dysplasia?

What is a Hip Dysplasia?

Terminology
Some sources prefer "developmental dysplasia of the hip" (DDH) to "congenital dislocation of the hip" (CDH), finding the latter term insufficiently flexible in describing the diversity of potential complications.[3]

The use of the word congenital can also imply that the condition already exists at birth. This terminology introduces challenges, because the joint in a newborn is formed from cartilage and still malleable, making the onset difficult to ascertain.

The term is not used consistently. In pediatric/neonatal orthopedics it is used to describe unstable/dislocatable hips and poorly developed acetabula. For adults it describes hips showing abnormal femur head or acetabular x-rays.[4] [5]

Some sources prefer the term "hip dysplasia" over DDH, considering it to be "simpler and more accurate", partly because of the redundancy created by the use of the terms developmental and dysplasia.[6]

Forms of the condition

Types of misalignments of femur head to socket in hip dysplasia. A: Normal. B: Dysplasia. C: Subluxation. D: Luxation

The condition can be bilateral or unilateral:

If the joint is fully dislocated a false acetabulum often forms (often higher up on the pelvis) opposite the dislocated femoral head position.

In actetabular dysplasia the acetabulum (socket) is too shallow or deformed. The center-edge angle is measured as described by Wiberg [8]. In coxa vara the femur head grows at too narrow an angle to the shaft, in coxa valga the angle is too wide.

A rare type, the "Beukes familial hip dysplasia" is found among Afrikaners that are members of the Beukes family. The femur head is flat and irregular. Sufferers develop osteoarthritis at an early age.[9]

Rather than using the Wiberg angle because it makes it difficult to quantify the degree of dislocation they used 3 key elements to determine the degree of subluxation: A reference line at the lower rim of the "teardrop", junction between the femoral head and neck of the respective joint and the height of the pelvis (vertical measurement). They studied anteroposterior pelvic x-rays and drew horizontal lines through the lower rim of a feature called "teardrop". The distance between this line and the middle lines of the junction between femur head and neck gave them a measure of the degree of femur head subluxation. They further established that a "normal" diameter of the femur head measures 20% of the hight of the pelvis. If the middle line of the neck-head junction was more than 10% of the pelvis hight above the reference line they considered the joint to be more than 50% dislocated.

Incidence
Determining an incidence can be difficult, because many cases appear to spontaneously resolve.[12][13]

An instability rate of 1:60 has been described, though this rate drops to 1:240 at one week.[14] The condition occurs with higher frequency in females than in males.[15]

Causes
Hip dysplasia is considered to be a multifactorial condition: that means that several factors are involved in causing the condition to manifest. [16]

Congenital
Some studies suggest a hormonal link.[15] Specifically the hormone relaxin has been indicated.[17]

A genetic factor is indicated by the trait running in families and increased occurrence in some ethnic populations (e.g. native Americans[18], Lapps[19] / Sami people[20]). A locus has been described on chromosome 13.[21] Beukes familial dysplasia, on the other hand, was found to map to an 11-cM region on chromosome 4q35. With nonpenetrant carriers not affected.[22]

Acquired
As an acquired condition it has often been linked to traditions of swaddling infants[23] or use of a cradle board which locks the hip joint in an "abducted" position for extended periods. Modern swaddling techniques allow some room for leg movement. [24]

Further risk factors include breech birth and firstborns.[25] In breech position the femoral head tends to get pushed out of the socket. A narrow uterus also facilitates hip joint dislocation during fetal development and birth.

Diagnostics
Most countries have standard newborn exams that include a hip joint exam screening for early detection of hip dysplasia. It can often be detected by a "click" or more precisely "clunk" in the hip[26] (although not all clicks indicate hip dysplasia).[27] Two maneuvers commonly employed for diagnosis in neonatal exams are the Ortolani maneuver and the Barlow maneuver.

The condition can be confirmed by ultrasound and X-ray. Ultrasound imaging yields better results defining the anatomy until the cartilage is ossified. When the infant is around 3 months old a clear roentgenographic image can be achieved. Unfortunately the time the joint gives a good x-ray image is also is the point at which nonsurgical treatment methods cease to give good results. In x-ray imaging dislocation may be indicated if the Shenton's line (an arc drawn from the medial femoral neck through the superior margin of the obturator foramen[28]) does not result in a smooth arc. 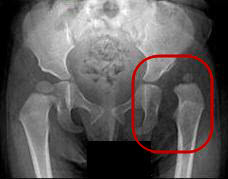 Asymmetrical gluteal folds and an apparent limb-length inequality can further indicate unilateral hip dysplasia. Most vexingly, many newborn hips show a certain ligamentous laxity, which can make severely malformed joints appear stable. That is one reason why follow-up exams and developmental monitoring are important. Routine ultrasound screening has been discussed and rejected mainly because the small benefit would not justify the costs[29].

The Harris hip score[30] (developed by William H. Harris MD, an orthopedist from Massachusetts) is one way to evaluate hip function following surgery. Other scoring methods are based on patients' evaluation like e.g. the Oxford hip score, HOOS and WOMAC score.[31] Children's Hospital Oakland Hip Evaluation Scale (CHOHES) is a modification of the Harris hip score that is currently being evaluated.[32]

Treatment
Given the very real possibility of a limp, constant and/or debilitating pain, complicated treatment and impaired mobility later in life, careful developmental monitoring and early intervention are indicated.

Harnesses, casts, and traction
Early hip dysplasia can often be treated using a Pavlik harness (see photograph) or the Frejka pillow/splint[33] in the first year of life with usually normal results. Cases of femoral head avascular necrosis have been reported with the use of the Pavlik harness,[34] but whether these cases were due to improper application of the device or a complication encountered in the course of the disorder mainly because the sheet of the iliopsoas muscle pushes circumflex artery against the neck of the femur and decreases blood flow to the femoral head. That is the reason why the Fredjka pillow is not indicated in all the forms of the developmental dysplasia of the hip. 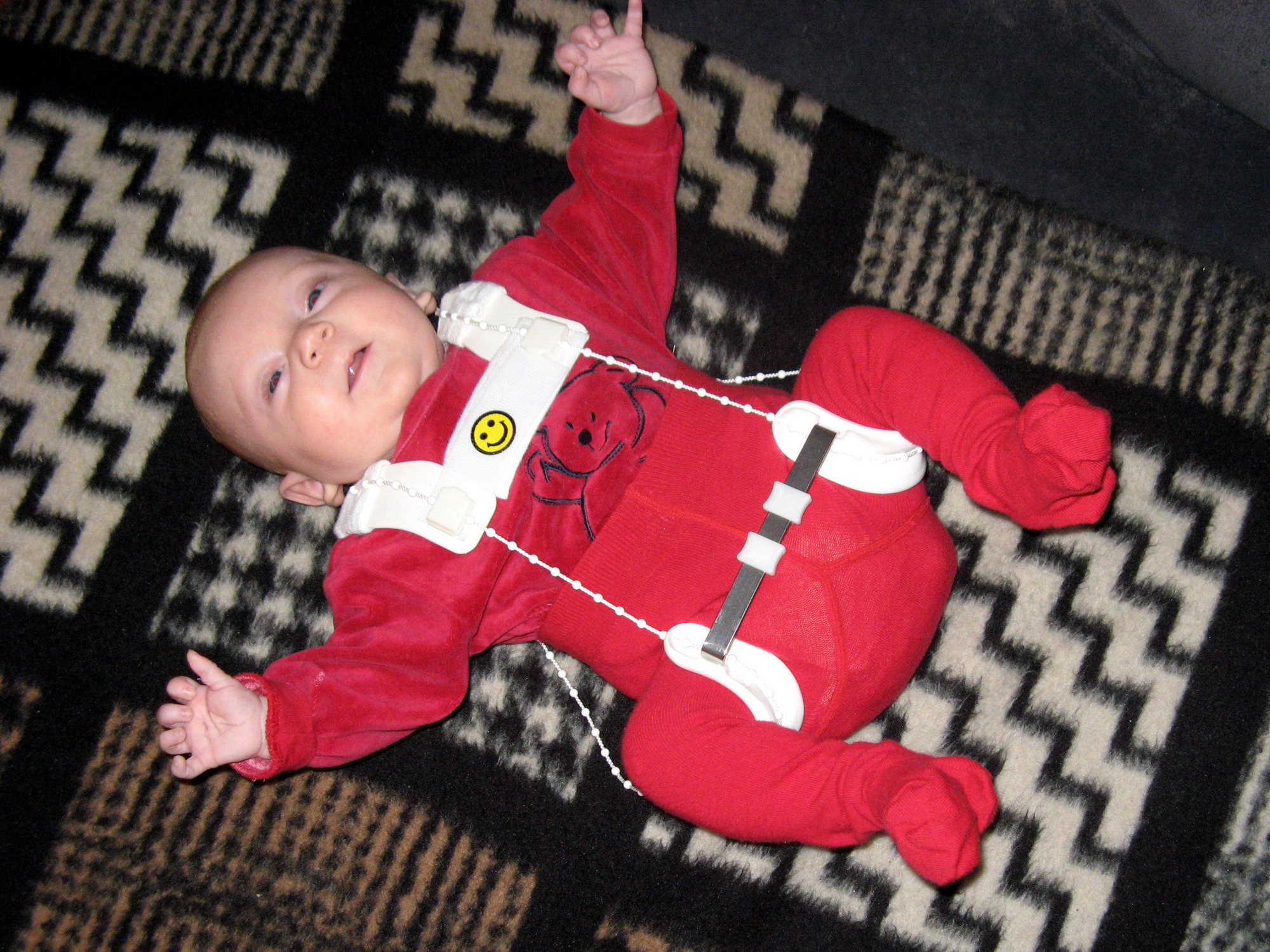 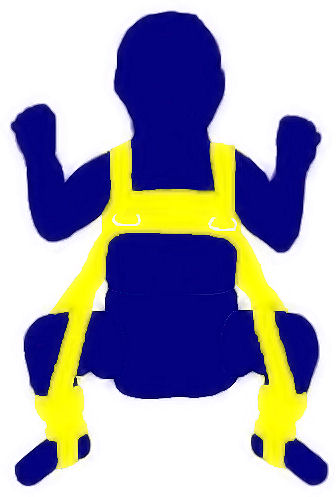 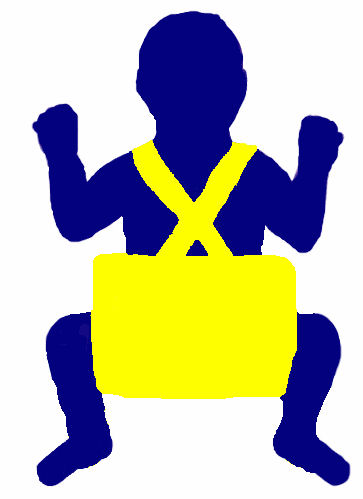 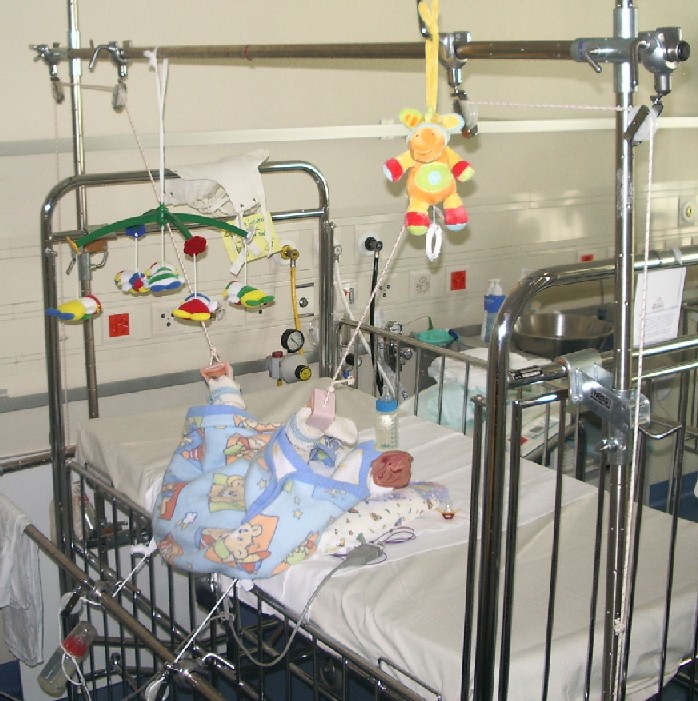 Other devices employed include the spica cast, particularly following surgical closed reduction. A few weeks in traction can be used as part of a treatment plan.

Surgery
In older children the hip abductor and iliopsoas muscles have to be treated surgically because they adapt to the dislocated joint position (contracture). Braces and splints are often used following either of these methods to continue treatment. Although some children "outgrow" untreated mild hip dysplasia[5] and some forms of untreated dysplasia cause little or no impairment of quality of life, studies have as yet been unable to find a method of predicting outcomes. On the other hand, it has often been documented that starting treatment late leads to complications and ends in poor results.

Stem cells
One avenue of research is using stem cells, either in grafting (bone grafting) with autologous fibroblasts or chondrocyte progenitor cells to assist in firmly anchoring the artificial material in the bone bed when the osteotomy is maked.

Hip replacement and osteotomy
Hip dysplasia is often cited as causing osteoarthritis of the hip at a comparatively young age. Dislocated load bearing surfaces lead to increased and unusual wear. Although there are studies that contradict these findings. (see [35] [36]) Subsequent treatment with total hip arthroplasty (Hip replacement) is complicated by a need for revision surgery (replacing the artificial joint) due to skeletal changes as the body matures, loosening/wear or bone resorption.

Osteotomies are either used in conjunction with arthroplasty or by themselves to correct misalignment.