Home » FAQs » Conditions Procedures » What is a Osteoarthrits?

What is a Osteoarthrits?

Osteoarthritis (OA, also known as degenerative arthritis, degenerative joint disease), is a clinical syndrome in which low-grade inflammation results in pain in the joints, caused by abnormal wearing of the cartilage that covers and acts as a cushion inside joints and destruction or decrease of synovial fluid that lubricates those joints.

As the bone surfaces become less well protected by cartilage, the patient experiences pain upon weight bearing, including walking and standing. Due to decreased movement because of the pain, regional muscles may atrophy, and ligaments may become more lax.[1] OA is the most common form of arthritis,[1] and the leading cause of chronic disability in the United States.[2] 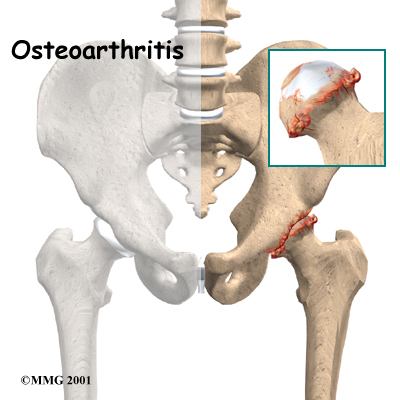 "Osteoarthritis" is derived from the Greek word "osteo", meaning "of the bone", "arthro", meaning "joint", and "itis", meaning inflammation, although many sufferers have little or no inflammation. A common misconception is that OA is due solely to wear and tear, since OA typically is not present in younger people. However, while age is correlated with OA incidence, this correlation merely illustrates that OA is a process that takes time to develop. There is usually an underlying cause for OA, in which case it is described as secondary OA. If no underlying cause can be identified it is described as primary OA. "Degenerative arthritis" is often used as a synonym for OA, but the latter involves both degenerative and regenerative changes.

OA affects nearly 21 million people in the United States, accounting for 25% of visits to primary care physicians, and half of all NSAID (Non-Steroidal Anti-Inflammatory Drugs) prescriptions. It is estimated that 80% of the population will have radiographic evidence of OA by age 65, although only 60% of those will be symptomatic.[3] In the United States, hospitalizations for osteoarthritis soared from about 322,000 in 1993 to 735,000 in 2006.[4]

Signs and symptoms
The main symptom is acute pain, causing loss of ability and often stiffness. "Pain" is generally described as a sharp ache, or a burning sensation in the associated muscles and tendons. OA can cause a crackling noise (called "crepitus") when the affected joint is moved or touched, and patients may experience muscle spasm and contractions in the tendons. Occasionally, the joints may also be filled with fluid. Humid weather increases the pain in many patients.[5]

OA commonly affects the hips, feet, spine, and the large weight bearing joints, such as the hips and knees, although in theory, any joint in the body can be affected. As OA progresses, the affected joints appear larger, are stiff and painful, and usually feel worse, the more they are used throughout the day, thus distinguishing it from rheumatoid arthritis.

In smaller joints, such as at the fingers, hard bony enlargements, called Heberden's nodes (on the distal interphalangeal joints) and/or Bouchard's nodes (on the proximal interphalangeal joints), may form, and though they are not necessarily painful, they do limit the movement of the fingers significantly. OA at the toes leads to the formation of bunions, rendering them red or swollen.

OA is the most common cause of water on the knee, an accumulation of excess fluid in or around the knee joint. [6]

Causes
Although it commonly arises from trauma, osteoarthritis often affects multiple members of the same family, suggesting that there is hereditary susceptibility to this condition. A number of studies have shown that there is a greater prevalence of the disease between siblings and especially identical twins, indicating a hereditary basis [7]. Up to 60% of OA cases are thought to result from genetic factors. Researchers are also investigating the possibility of allergies, infections, or fungi as a cause.

Two types
OA affects nearly 21 million people in the United States, accounting for 25% of visits to primary care physicians, and half of all NSAID (Non-Steroidal Anti-Inflammatory Drugs) prescriptions. It is estimated that 80% of the population will have radiographic evidence of OA by age 65, although only 60% of those will be symptomatic.[3] Treatment is with NSAIDs, local injections of glucocorticoid or hyaluronan, and in severe cases, with joint replacement surgery. There has been no cure for OA, as cartilage has not been induced to regenerate. However, if OA is caused by cartilage damage (for example as a result of an injury) Autologous Chondrocyte Implantation may be a possible treatment.[8] Clinical trials employing tissue-engineering methods have demonstrated regeneration of cartilage in damaged knees, including those that had progressed to osteoarthritis.[9] Further, in January 2007, Johns Hopkins University was offering to license a technology of this kind, [10] listing several clinical competitors in its market analysis.

Primary
This type of OA is a chronic degenerative disorder related to but not caused by aging, as there are people well into their nineties who have no clinical or functional signs of the disease. As a person ages, the water content of the cartilage decreases due to a reduced proteoglycan content, thus causing the cartilage to be less resilient. Without the protective effects of the proteoglycans, the collagen fibers of the cartilage can become susceptible to degradation and thus exacerbate the degeneration. Inflammation of the surrounding joint capsule can also occur, though often mild (compared to that which occurs in rheumatoid arthritis). This can happen as breakdown products from the cartilage are released into the synovial space, and the cells lining the joint attempt to remove them. New bone outgrowths, called "spurs" or osteophytes, can form on the margins of the joints, possibly in an attempt to improve the congruence of the articular cartilage surfaces. These bone changes, together with the inflammation, can be both painful and debilitating.

Secondary
This type of OA is caused by other factors but the resulting pathology is the same as for primary OA:
Congenital disorders, such as:

Diagnosis
Diagnosis is normally done through x-rays. This is possible because loss of cartilage, subchondral ("below cartilage") sclerosis, subchondral cysts from synovial fluid entering small microfractures under pressure, narrowing of the joint space between the articulating bones, and bone spur formation (osteophytes) - from increased bone turnover in this inflammatory condition, show up clearly on x-rays. Plain films, however, often do not correlate well with the findings of physical examination of the affected joints.

With or without other techniques, such as MRI (magnetic resonance imaging), arthrocentesis and arthroscopy, diagnosis can be made by a careful study of the duration, location, the character of the joint symptoms, and the appearance of the joints themselves. As yet, there are no methods available to detect OA in its early and potentially treatable stages.

In 1990, the College of Rheumatology, using data from a multi-center study, developed a set of criteria for the diagnosis of hand osteoarthritis based on hard tissue enlargement and swelling of certain joints. These criteria were found to be 92% sensitive and 98% specific for hand osteoarthritis versus other entities such as rheumatoid arthritis and spondyloarthropities [11].

Related pathologies whose names may be confused with osteoarthritis include pseudo-arthrosis. This is derived from the Greek words pseudo, meaning "false", and arthrosis, meaning "joint." Radiographic diagnosis results in diagnosis of a fracture within a joint, which is not to be confused with osteoarthritis which is a degenerative pathology affecting a high incidence of distal phalangeal joints of female patients.

Treatment
Generally speaking, the process of clinically detectable osteoarthritis is irreversible, and typical treatment consists of medication or other interventions that can reduce the pain of OA and thereby improve the function of the joint.

Conservative care
No matter the severity or location of OA, conservative measures such as weight control, appropriate rest and exercise, and the use of mechanical support devices are usually beneficial. In OA of the knees, knee braces, a cane, or a walker can be helpful for walking and support. Regular exercise, if possible, in the form of walking or swimming, is encouraged. Applying local heat before, and cold packs after exercise, can help relieve pain and inflammation, as can relaxation techniques. Heat — often moist heat — eases inflammation and swelling, and may improve circulation, which has a healing effect on the local area. Weight loss can relieve joint stress and may delay progression [citation needed]. Proper advice and guidance by a health care provider is important in OA management, enabling people with this condition to improve their quality of life.

In 2002, a randomized, blinded assessor trial was published showing a positive effect on hand function with patients who practiced home joint protection exercises (JPE). Grip strength, the primary outcome parameter, increased by 25% in the exercise group versus no improvement in the control group. Global hand function improved by 65% for those undertaking JPE. [12]

Medical treatment
Medical treatment includes NSAIDs, local injections of glucocorticoid or hyaluronan, and in severe cases, with joint replacement surgery. There has been no cure for OA, as cartilage has not been induced to regenerate. However, if OA is caused by cartilage damage (for example as a result of an injury) Autologous Chondrocyte Implantation may be a possible treatment.[8] Clinical trials employing tissue-engineering methods have demonstrated regeneration of cartilage in damaged knees, including those that had progressed to osteoarthritis.[9] Further, in January 2007, Johns Hopkins University was offering to license a technology of this kind, [10] listing several clinical competitors in its market analysis.