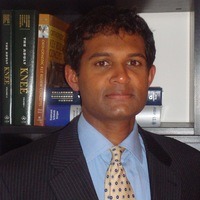 Interviewed by Debbie McCreight on August 26, 2013

Hi Dr. Kusuma, can you please first start out by telling us how you got started with Hip Resurfacing and give us a little background on your experience as a surgeon. Where did you train for hip resurfacing? Who trained you? Are you continuing your training after starting resurfacing?

I haveextensive training in hip resurfacing, and have a long history of experience with this procedure. I was first exposed to the Birmingham Hip Resurfacing procedure in 2007 during my fellowship at Rush University Medical Center in Chicago. I had the privilege of working with surgeons at Rush University who performed some of the very first Birmingham Hip Resurfacings in the United States and I was able to perform a large number of these procedures during my initial experience.

Do you do the neck capsule preservation technique in your surgeries?

Yes I was trained on the intricacies and importance of capsular preservation and have performed  that technique since the start of hip resurfacing series.

Which approach do you prefer to use anteriolateral or posterior and why?

The direct anterior approach for resurfacing is unsafe and has resulted in very poor implant placement and alignment and has made a difficult operation even more difficult. I would strongly advise against use of the DA approach for hip resurfacing.

How long do you feel it takes for the bone to be fully healed, actually grow into the prosthesis?

In a healthy patient, at 3 months, the components should be well healed and ingrown into the bone. However, I think patients should wait 6 months prior to commencement of running and contact sports.

Barring any complications, how many days in the hospital will a patient normally stay?

Over 95% of my patients can be discharged from the hospital within 48 hours of the procedure and about 30% will be discharged home the very next day after surgery.

My patients will be ambulatory and walking with full weight bearing capacity the day of surgery. They may commence swimming, walking on a treadmill, using an exercise bike, and elliptical trainer at 7 days post surgery. I ask ALL patients to use a cane, walker, crutch or simple walking stick for the first six weeks for balance purposes. Patients should use TED stockings for 14 days and use aspirin as a blood thinner for six weeks. Icing is always beneficial and should be used liberally, 5-6 times/day for 10-20 minutes per session for the first four weeks.  In very few cases do I prescribe outpatient physical therapy, as most patients simply don’t need it and progress very well on their own using a treadmill, stationery bike, swimming pool, and elliptical trainer.

How long before a typical patient is allowed to drive a car, return to work?

Patients can drive in about ten days and return to a desk job in 7-10 days.

What is the recommended time you tell your patients before they can start to run again/do impact sports? Are there any sports you don’t want your patients to participate in after surgery?

What is your take on cementless (femoral) devices for resurfacing?

Do you have a cutoff age for resurfacing patients or do you go on a case by case basis?

I do not have an age cutoff. I am more interested in patient health, bone quality, activity, and post surgical goals.

What type of anesthesia do you use general or epidural?

I generally use spinal or general anesthesia.

How long does the surgery normally take?

My BHR procedure takes about 90 minutes.  In larger more muscular males, I spend about 100 to 110 minutes.

What is the incision length?

This is patient dependent. The goal of the procedure is to achieve perfect implant position and soft tissue preservation.  I make an adequately sized incision to achieve these goals. In large, muscular males, I use a larger incision of about 15-18 centimeters. In thinner patients 12-15 centimeters is sufficient.

I start my “post-op” pain protocol in the preoperative holding area by giving patients a cocktail of oral medications that help alleviate post-op pain. During the surgery, handle the muscles and soft tissues very delicately and control bleeding meticulously, as this reduces post-op pain. After surgery, I put patients on a combination of oral Tylenol, IV toradal, low dose oral long acting narcotic, oral celebrex, and IV narcotic for breakthrough pain. With this protocol, we have achieved excellent pain control after surgery and patients recover very quickly.

Are there any cases that you will not take in particular, AVN, Dysplasia, small cysts? Maybe touch on some of the very difficult cases you have been able to resurface?

I will evaluate any and all cases for resurfacing. However, we have learned in the past decade that dysplastic females with excessive acetabular and femoral anteversion and vertical acetabular orientation are not great candidates for resurfacing. Patients with advanced AVN are also not great candidates, as their 10 year failure rate is around 10-12%. I have resurfaced many difficult cases including patients with old acetabular fractures and post-traumatic arthritis with pre-existing hardware in place. I have also resurfaced many large, muscular males who were former NFL professional football players. I have resurfaced patients with large acetabular cysts with careful reaming techniques and bone grafting. I have also resurfaced many young patients with old failed pelvic osteotomies and preexisting hardware.

Do you do bilateral surgeries same day, if not how far apart do you recommend?

I do perform same day bilateral resurfacings in healthy patients, and have also done them three to four days apart, a week apart, and of longer time intervals apart.

I use the Birmingham Hip because it has, without question, the best results and best track record. I have used it for my entire career.

If you can’t perform a hip resurfacing-what THR device do you prefer and why?

If I can’t perform hip resurfacing, I strongly prefer the Smith & Nephew STS (short taper) stem with the R3 cup and oxinium on highly crosslinked polyethylene. I love this short stem because it’s very bone conserving and invades minimal femoral canal bone. The oxinium on polyethylene bearing also has a great track record of performance and longevity in multiple worldwide hip registries.

What do you consider an adequate number of surgeries for a doctor to be proficient at hip resurfacing?

A doctor needs to see and scrub in on at least 100 hip resurfacings prior to performing his/her first procedures. During these first few procedures, I would HIGHLY recommend that the surgeon have an experienced proctor surgeon with him/her to assist and provide tips.

What are your views on operating on women? What factors need to be taken into consideration? Femoral size, age, bone quality? Activity level?

Can you tell us your success rate on the resurfacings that you have done to date?  What percentage have been men versus women?

I have performed over 400 hip resurfacings to date 20% being female, 80% men and have a total of two failures. The first was patient who had a successful operation for 16 months, but then developed an infection that was completely unrelated to the procedure I performed, but rather developed the infection as a result of a contaminated vaccination that he received. As a result of this severe infection, he had to have his resurfacing removed and had to have an antibiotic spacer placed followed by reimplantation with a standard THA. The second and only other failure I have had happened in a 29 year old male with a history of sickle cell anemia. He had extreme valgus of his femoral neck, and therefore after the surgery, he did not have enough femoral offset to maintain hip stability, despite optimally placed components. Therefore, I had to convert him to a regular THA shortly after his initial surgery and he has done very well since then. In hindsight, in this second patient with sickle cell disease, I probably should not have attempted a resurfacing at all, as his femoral geometry was not favorable, but I wanted to give him every chance I could to maintain his femoral bone stock because of his young age.

How many times during surgery have you had to change to a THR instead of a resurfacing and why was the change made?

Only once out of over 400 cases. In this case, it was a female patient who had a very large cyst in her femoral head that would have made resurfacing unsuccessful. This lady received a standard THA and has done extremely well.