1).  Can you start out by telling us a little bit about your background and how you started with your work in implant retrievals? 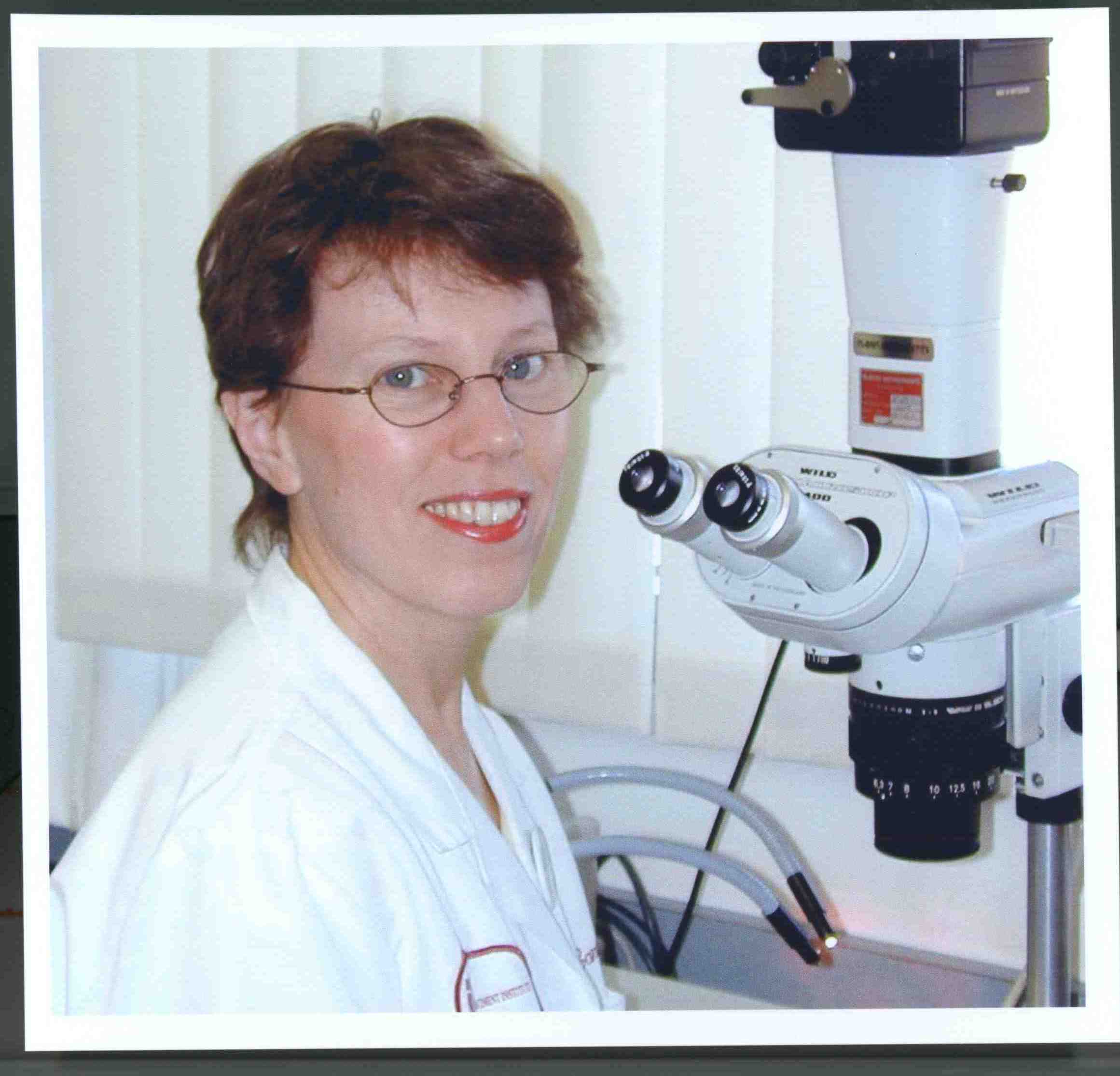 I came to California after getting an honors degree in Anatomy and Human Biology at the University of Western Australia . After working for many years in orthopaedic research laboratories specializing in joint replacement, I did my doctorate in medical sciences, and wrote my thesis on the role of polyethylene particles in implant loosening.  I developed an interest in the failure mechanisms of total hip replacements and have been fortunate to be able to specialize in this area of research.

2). You are doing a great service for the patient and doctor community by doing these implant retrieval studies.  How are you funded and what can the community do to help you?

The lab is funded through a mix of outside contract work, mostly through surgeons or manufacturers sending devices for analysis, grants and Orthopaedic Hospital Foundation support.  I am fortunate to get support from my colleague-collaborators at the Joint Replacement Institute at the St Vincent Medical center in Los Angeles .  The Los Angeles Orthopaedic Hospital Foundation welcomes donations to help continue the work in my lab. For further information, see the website at http://orthohospital.org/. In addition to their implant retrieval work, the Joint Replacement Institute has a unique willed joint program where patients can donate their hips for research http://www.jri-docs.com/

3). Can you explain to us a little about what it is exactly that you do?

Our group at the J Vernon Luck orthopaedic research center at examines failed hip replacements using various techniques to help determine factors that contributed to the need for revision.  We are an independent center that can verify the clinical performance of an implant and the information is provided to surgeons and manufacturers with the aim to improve joint replacement performance. My role is to put together the information provided by the surgeon with the results of our analysis of the component wear measurement, the appearance of the bone within the component and the microscopic information.  I also collaborate with the chief of Pathology at UCLA Santa Monica Hospital and together we are trying to improve the pathological assessment of periprosthetic joint tissues, particularly for cases of suspected metal sensitivity. We have started a website : http://www.metalsensitivity.com/

4). Are you presenting your research at this conference?

5). What is metal sensitivity and how common is this, considering lots of people seem to have problems with jewelry?

Metal hypersensitivity is a type of allergic response to one of the metals in the implant6. It seems to be quite rare considering the many hundreds of thousands of metal-on-metal total hips that have been implanted.  Whether having a skin sensitivity to jewelry means that a patient will have a problem with a metal-metal hip implant is unknown, but at least anecdotally, there are patients who have a skin problem yet have no apparent problem with their hip resurfacing. Also, we know that about 10 – 15% of the general population has a skin sensitivity to metal (mostly nickel) but the numbers reporting a hip allergy problem is nowhere near this level.

6). Is metal sensitivity the same as ALVAL?

ALVAL stands for aseptic lymphocytic vasculitis associated lesions – this is a term that refers to microscopic features of the  tissues from metal-on-metal joints12 .The degree of ALVAL seems to be highest in patients with clinical signs of metal sensitivity, but the same features to a lesser degree can be seen in tissues when there is a large amount of wear debris.  We are still in the process of understanding what these features mean in terms of the patient’s response to the implant and how it can affect longevity.  This is a current focus of my research, and in several other centers.

This might better be called a “periprosthetic inflammatory mass”. This is a swelling or mass that forms in the hip joint.  These have occasionally been reported around metal-on-polyethylene hips9, and occasionally in total knees2
Recently “pseudotumors” have been reported around metal-on-metal hip resurfacings and one group in Oxford England has a number of publications about these11.  Some surgeons have never encountered this problem so the incidence still seems to be low overall.   While there is still some uncertainty about what causes them, research from my lab and others suggests that they are the result of malfunctioning implants with unusually high wear and metal ion levels.

If you remember your high school chemistry lessons – putting salt into water forms sodium and chloride ions – or charged particles.  Metal ions are formed from the corrosion or dissolution of the particles that are produced from the metal-on-metal bearing or other metal surfaces that produce particles.  They are probably formed in all types of metal implants including knees and spinal implants but there is more attention on them now since metal-on-metal bearing hips such as hip resurfacings are known to produce elevated levels in patients with these implants compared to patients with metal-on-polyethylene implants10.

9). What is the difference between a metal sensitivity test and a metal ions test?

A metal sensitivity test can be done to see if a patient has an allergic response to one of the metals in the implant. It can be done before or after the surgery. An ion test is done to measure the amount of cobalt and chromium metal ions in the blood or urine –it is done after the surgery has been done to check if it is working well, i.e. producing low wear and low ion levels or high wear and high ion levels.

The sensitivity test can be in the form of a small patch containing metal compounds applied to the arm or back for several days, or a blood test where white blood cells are exposed to the metals of the component. The ion test requires a blood or urine sample, usually 3 tubes of blood and preferably a full 24 hour collection of urine. Only certain specialized labs do these tests, and they are mostly done as part of a research study, so they are not readily available to all patients, although surgeons can often arrange to have them done.

Unfortunately, the available metal sensitivity tests are not very reliable for predicting if a patient will have a problem with a hip implant allergic reaction.  There is research underway to try to improve the screening and diagnosis of patients who might have this problem. Ion measurements, when done in an experienced lab, and when the samples have been collected carefully to avoid contamination, are very accurate and reliable and can be very helpful to the surgeon to indicate if an implant is working properly or not.

12).  Do vitamins with chromium or any food substances or supplements increase ion levels?

Yes, to a small degree they do – patients who are tested prior to receiving any implants often have detectable chromium from exposure in the diet.

13).  How do you even know what percentage of individuals with metal implants have a high ion count since so little testing of this nature is done?  How was the *norm* determined?

Certainly we know that only a tiny number of patients with metal-on-metal implants get tested, and only a tiny fraction of them have high ion levels.  The testing is not available widely and is currently more of a research tool than a standard test, although more surgeons are starting to apply it to their routine follow up protocols, The need to know what levels are normal and what percentage of patients have high levels is the reason research centers and implant manufacturers are doing the metal ion monitoring studies.

14).  Is there an affordable lab test for metal ion levels?

There are several commercial trace element testing labs where the actual test costs about $120 - $150, but there are costs incurred in getting the blood drawn and then shipping the blood to the lab.

15).  Is there any one implant (BHR, C+, ASR, etc.) associated with higher ion levels than others?

The recent data shows that, in general, well-made and well-placed metal-on-metal hip resurfacing implants all have low levels of ions, i.e., they are not significantly higher than the stem-type metal-on-metal implants that are used for comparison. In my opinion, it is too soon to tell if subtle design differences between implants will lead to systematic ion level differences in the long-term that are clinically significant mostly because we don’t have enough data.  However, we now know that if the implants are malpositioned the risk for high ions increases 4,7 . Studies are underway and more data is being collected to help answer this question and to provide the answer to the bigger questions – what are safe, acceptable levels?

16).   Are there any other risk factors for potential problems associated with the metal implant that you now know of? (Anything..female, short, thin, fat, etc.)

One thing that most researchers in orthopaedics agree on is that there is rarely any one particular risk factor for a problem because there are so many contributing factors – every issue can be shown to be multi-factorial.  To make it even more difficult, the current ion and retrieval analysis data are based on very small numbers of patients and these studies would be more reliable with many thousands of data points. However, there is data to suggest that small implants – which are typically used in female patients -  are at higher risk for wear problems when the implants are placed incorrectly 5 . Fortunately, based on the current data, it doesn’t seem that patient activity levels affect ion levels 3,8

17).  I read that your lab was awarded a Hip Society award 3 years ago. Tell me about that.

This was a study of hip resurfacing failures based on about 200 implants that were analyzed by our team, which included surgeon collaborators in Belgium and Canada1.  A number of interesting findings emerged such as the importance of patient selection so that the femoral head bone was suitable for the resurfacing procedure, and the high degree of variability in the way the cement was used to fix the component to the bone.  It was also apparent that despite quite a lot of damage and disruption during the surgical procedure, the bone of the femoral head has a remarkable ability to heal and adapt.  That’s why, despite the problems we hear about with fractures, and pseudotumors and metal sensitivity, the majority of hip resurfacing operations work very well.  We hope that with ongoing research there will be even more improvements.