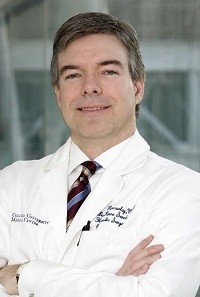 William Macaulay, M.D., The Nas S. Eftekhar Professor for Orthopaedic Surgery at NewYork- Presbyterian Hospital at Columbia Univeristy, has been Director of the Center for Hip and Knee Replacement (CHKR) and Chief of Adult Reconstruction (Hip and Knee) at Columbia since 2001.  Dr. Macaulay is a College of Physicians and Surgeons (Columbia University) graduate and completed his fellowship training in 1999 at the Hospital For Special Surgery.

The CHKR, which Dr. Macaulay founded in 2001, was honorably mentioned in 2006 in New York Magazine as a top center for total hip replacement in New York.  In 2007, Dr. Macaulay’s hip resurfacing and patients were the topic of prominent stories in The New York Times and on the CBS Evening News with Katie Curic.

Dr. Macaulay is author of more than 70 peer reviewed journal articles and numerous book chapters aimed at teaching surgeons optimal techniques in Hip Resurfacing and Total Hip Replacement (primary and revision).  As a testament to his reputation amongst his peers, he was inducted into The Hip Society in 2010, which is one of the greatest honors which can be bestowed on a hip surgeon in the US.

The mission of The Hip Society is to advance knowledge of the hip joint in health and in distress.