The first BHR was implanted in July 1997 and it is unchanged until present day.

My belief is that possibly the 96.1% was affected by the introduction in the US and the learning curve here. But, again this is my "opinion" only. — VM 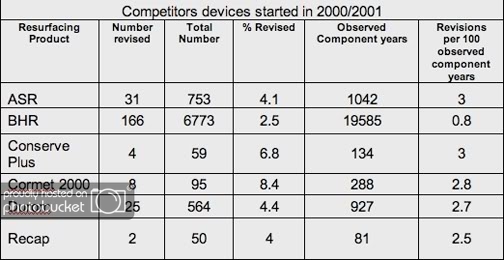 These numbers were all from the Australian Hip Registry which was established in 1999. A total of 140,018 patients registered with 160349 procedures out of which 8361 were resurfacings.

The BHR was started in 1999 and the competitors started in 2000 and 2001. This is the latest data published in that registry. I am sure there are more details in the registry itself, but this is all the data, well minus 1% of resurfacing done in Australia. I think it is somewhat a good overall feel for the results considering it is gathered over almost the same amount of time, from all of Australia in all patients given the procedure which would cover all doctors, etc.

Some important points made at the conference.
It is imperative that the newer doctors pick IDEAL candidates ONLY

If you have a very straight forward case, then you can decide if it is worth the risk of going to a newer less experienced surgeon but if you have any complications at all, dysplasia, cysts, AVN, pick an experienced resurfacing surgeon. — VM

Slipped Cups
Slipped cup question came up during Dr. Su's live surgery video with two way audio.  Dr. Su has not had one slipped cup in over 400 procedures to date, he stated that if a cup is seated properly it will not shift or slip.  McMinn wanted to make it clear that the focus to date was on the placement of the femoral component but more care needs to be made on the acetebular cup side and the importance of this as well.

Age and Sex of Preferred Patients
I asked individual doctors the question about age.  Some will cut off at 55 for women, others will look at individual cases.

I really do not like when they use age as a determining factor without looking at all other aspects of a patient including bone density, health, activity level, etc. — VM

Overall the majority of failures seemed to happen in women, so they were saying ideal candidate were men, so the newer docs will probably be more selective with the women patients.

Negative factors for not performing resurfacing were:

They also found that AVN cases tended to have about 8 - 10 % lower survivorship at 10 years than OA cases. So, not all docs will be doing AVN cases.

Metal Sensitivity
They didn't actually cover any symptoms a patient would get. The only time there was mention of symptoms was during the metal sensitivity presentation, where they basically stated that the very rare incidences of unknown pain that lead to revision was usually due to the rare incidence of metal allergy.

Out of 6147 hips they had 18 or .05% with unexplained pain. 11 of 18 retrievals for pain were suspected sensitivity. So with 11 of thousands implanted, true incidences, very rare.

Computer Navigation
This subject was touched on at the conference. Some doctors do use this but the overall take on this with Mr. McMinn was that you can get a much, more accurate placement of the device without the navigation system. He implanted several using the computer navigation and when he measured after, his personal placements were more accurate. I know that Dr. Bose also prefers not using the equipment even though it is available to him at Apollo Hospital according to his website.

Conclusions, this might be a good solution for newer doctors doing hip resurfacing but the more experienced docs actually get more precise placement not using computer navigation.