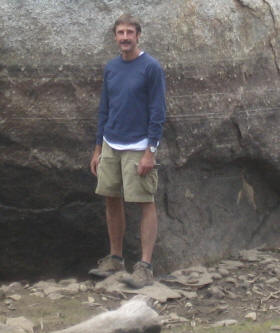 First of all, my apologies for not replying sooner. My story started at the tail end of 2004 with what I thought was a pulled groin muscle from running. I was a runner for 35 years. If my groin bothered me, I would always back off a little from the amount of running I did and it would always get better...except this time it didn't. I tried to run several times after one particular occurence and one day the pain was so great I could run no more. That started my saga with doctors...first X-Ray showed deteriorating cartilidge and arthritis. But not to worry...I had at least five years left on the remaining cartilidge, but we want to see you every six months for an X-Ray. The first six months passed...first X-Ray showed no more cartilidge left! I was told I needed a new hip...I would get a plastic one, one leg may be longer than the other, etc.I DON’T THINK SO!

By this time, I had met Alan, and he was already educating me about hip resurfacing because he noticed my limp that had started. There was also another member of our club that had both of his hips replaced by Dr. Amstutz in Los Angeles. So that began a long and winding road of research about hip resurfacing and all the physicians involved with it here and abroad. I went down and saw Dr. Amstutz and after X-Rays and a consultation he told me I would be a good candidate for resurfacing. I sent one of my X-Rays to Desmet in Belgium and he, too, said I was a good candidate. I started a lengthy appeals process with Kaiser, submitting my story and a ream of information and data that Dr. Amstutz was kind enough to give to me and submit along with my appeal. I wanted Dr. Amstutz to perform the surgery. But this was May of 2006 and the FDA had just approved the BHR for use in this country. Kaiser, preparing for this, had sent their own doctors abroad to train and learn the procedure and as soon as the FDA approved the device, Kaiser was up and running with Dr. Barber in Oakland and Dr. Klug in Roseville.

I met with Dr. Barber first and actually set a surgery date with him. I wasn’t real comfortable with my decision, so I pressed his nurses and others about more info or recommendations for Barber. Feedback wasn’t good. I ended up meeting with Dr. Klug at the last minute...we talked for about an hour. I was totally impressed with him, and even though he had single digit experience with the prodedure, I felt comfortable with him and subsequent investigation and feedback validated my decision. Although everybody told me that an experienced doctor with many procedures under his belt would be the best, I took a leap of faith with Dr. Klug and have never regretted it. I believe I was his seventh procedure. The fact that I continued to keep myself in good shape was in my favor and by this time the pain was 24/7...I was only sleeping about two hours a night. I was READY, come hell or high water! Plus, Dr. Klug fit me into his schedule...I had to have the surgery in December when my daughter was home from college and I could recuperate during the slow time of my business.

I am a landscape contractor, and the ability to perform at my job was critical in my decision making process for choosing hip resurfacing...I wanted to be able to get back to doing what I did before my hip went bad.

I strengthened my leg every day...cycling, elliptical machines, weight machines,etc. I am now back to doing everything I used to do...even running. I couldn’t be more grateful and satisfied with the way things turned out and my decision to choose Dr. Klug. I also will be forever indebted to Alan for the invaluable help and advice he gave me. I also believe the better the shape your in before surgery, the faster you will recover after your surgery. I am attaching two pictures, they are both the same one...I don’t know which will be easier for you to adapt if you need to. It is a picture of me up in the Pinecrest, Dodge Ridge area in the summer of 2007. We had hiked several miles up to this point where the picture was taken. Most summers would find me, my daughter and other family and friends camping and hiking. When my hip went bad, I could no longer hike...I was devestated. This picture represents something, that when I was going through all the pain and time period prior to the operation, (two years), I thought I would never be able to do again. Hopefully it is good enough for your purposes...if not, let me know. Thank you for your interest...all is indeed well and I sincerely hope all is well with you. You do a great job getting all this info out to people who need it. If I can be of any further help, let me know.