Bilateral Hip Resurfacing
(Member of DAST Intl. Board of Directors)

As a television medical correspondent for decades on shows like Today, Dateline and the CBS evening News and author of 12 books on consumer medicine, I have to admit it. I have never faced a more vexing decision than that choosing between a total hip replacement and hip resurfacing.

The claims and data appeared wildly contradictory and each surgeon’s take was miles apart from the others. I called great friends in orthopedics at the leading Harvard hospitals and in NY, Baltimore and Los Angeles. The word I got was emphatic.

Don’t do the hip resurfacing, it’s a failed concept. It failed in the 70s and its doomed to fail again. They cited a high rate of femoral fracture after the operation. They also said I could get the same advantages out of the new total hips as resurfacing…low dislocation, high activity levels and the addition of much longer implant life than HR. A new study from the AAOS 2008 meeting even showed that some of the apparent advantages of HR were due to self selection. Simply put, younger patients chose resurfacing so it became a self fulfilling prophesy…younger patients had HR, worked harder afterward and did better. In other words, it wasn’t HR, it was self selection.

After years of marathons, bike races, ski competitions, marathon cross ski races, big wall ice climbing, big wave surfing and even accumulating a little shrapnel in a handful of wars, both of my hips were completely shot. The x-rays showed pure bone on bone with enormous osteophytes. One prominent surgeon said, you have no choice. Your hips are too far gone you’ll have to have THR. I thought for a moment. Boy if I’m confused as a physician and sports medicine expert, what chance on earth does the average patient have of making the right decision? One good answer is,

because they are both excellent choices. Still there had to be a right decision.

There's a fine line between adventure and danger - and Dr. Bob Arnot is taking you over it. This season jump on the back of a truck filled with Somali mercenaries, plunge 50 meters into the shark infested Red Sea; Every episode brings a new adventure, and danger is always on the itinerary.”
Click to view Dr. Danger on mojohd.com. 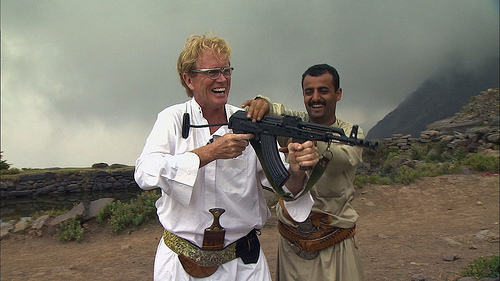 I began reading the entire world literature. I called doctors in France, England, Belgium, Germany. The more I read, the less I seemed to know. I reached out to Mr. Ronan Treacy, co inventor of the Birmingham hip and even the legendary Roger Banister’s son. Both were incredibly thoughtful and helpful. Both said they’d have HR themselves.

Then I came upon Surface Hippy Website and read everything on it. Finally, I watched the outstanding Dr. Michael Mont video on Pat's website. I went back over my notes, reread the literature and it suddenly became incredibly clear. What did I really want? I wanted to be able to heli ski, run the iron man, ski race, jump out of airplanes, do triathalons, surf bigger waves. I wanted to perform like a 25 year old again. I had the heart and lungs to do so, but the hips of a 90 year old. You only live once, so why compromise, why not go for it? There was the promise of turning back the clock. With THR I’d be restricted. Certainly no surgeon in his right mind would recommend a marathon with a THR. Still the THR was the safe route. Stick to biking and skiing the groomed slopes and THR would probably last a life time, said one surgeon. THR was a safe bet, a sure bet. The THR operation was faster and the recovery might be quicker as well. But as the star of the hit TV show Doctor Danger, I was expected to do extreme sports and the THR would never allow that.  Dr. Danger is featured at www.mojohd.com I spend much of each year in Africa on humanitarian projects, see featured video on You Tube called Emergency in Dafur . The decision ended up being a no brainer. Hip resurfacing with two BHRs.

Here’s how I finally made the decision.

With the decision made, now I needed a surgeon. I offered to fly to Birmingham, England to have one of the inventors do the procedure. Graciously, they said, no need. You’ll find a Dr. Edwin Su at the Hospital for Special Surgery in NY. He had their highest recommendation and that of every key player I could reach. HSS is considered number one in the US in Orthopedics. Their chief, Tom Sculco weighed in. “Ed is one of our very best.” Wow. This was the surgeon my great friend and physiatrist VJ Vad had recommended six months before. I called Dr Su’s office on a Friday morning. After 15 minutes of scrambling, his incredibly affective assistant Laura Janice had an OR date set for the following Thursday. I had spent the weekend in Aspen boosting my hemotacrit up to 48 so I wouldn’t need a transfusion. On Monday I had a complete cardiac workup, x-rays and a visit with Dr. Su. He demonstrated that I had 30 degree hip contractures on both sides. Any questions he said? A Month before I would pummeled him with dozens. I just turned to him and said. “You’re the best there is. I just want a near perfect biomechanical result. You’re a great surgeon and I trust you." The die was cast.

I skied right through my last day before surgery, flew to Washington for a meeting on a young cancer victim in Iraq we were efforting treatment for and arrived in NYC at 1 AM on the day of surgery. I worked out for two hours at the gym, then reported to the hospital. At 1:30 PM Dr, Su appeared. “I’m psyched,” I said. “So am I’” said Dr. Su.

I was wheeled down a long corridor that looked more like a star wars bionics laboratory than OR. Less than four hours later I was in recovery, on my computer and making a conference call. The following day I walked to the nurses station and back with crutches. Dr. Su came to visit each morning with a ready smile and encouraging manner. His bedside manner got a solid A plus as did the remarkable team at HSS. I was sad to leave!

By day ten, I had walked a mile on crutches, by day twelve, three miles. Now that I’m two weeks out I’m beginning to let myself dream of all things I’ll be able to do again that I’ve put on hold for so long…a much better pop for surfing, more precise racing turns in skiing, running, rock climbing, even the Ironman. I wondered why I had waited so long. The answer was simple - Most orthopods say…you’ll know when you’re ready. The truth is I had been ready for years. While Americans emphasize pain as the main reason for surgery, I have a very high threshold, did tons of yoga and never had terrible pain. The British emphasize functional criterion. I had a terrible limp, striking waddling gait abnormalities, an abductor lurch and large hip contractures. As my fourteen year old son said before surgery, “Dad, you look old, really old.” If I had one piece of advice it would be, get a great functional exam and use that to decide rather than pain alone. Curiously, all my pain was in my knees. My hips had thrown my biomechanics off so badly, that I was at risk of slowly destroying my knees.

Well. I think I’ve turned back the clock, gained 1.5 inches of height, regained my proper posture and discovered a miracle that Pat has been a champion of for so long. I’ve been disappointed by the amount of real expertise and helpful decision making information on so much of the web. As a physician I can tell you the surfacehippy.info  website is the best I have ever seen in a medical website. Even now after my operation, I scroll through the site each evening picking up new and useful tips on recovery and PT. Pat, you’re a real hero to more people than you’ll ever know!