I recently viewed the February 2009 interview that Vicky Marlow did with Dr. Klug from the Roseville Kaiser facility and wanted to add some comments about my story and how deeply Dr. Klug cares about his patients. And of course how good of a technician he is. Here is my story.

I knew Dr. Klug was the right doctor for me within five minutes of my first appointment. The video interview is very informative but it does not capture Dr. Klug's warmth, his complete confidence in treating his patents with the absolute best care, and his views on the medical profession. Dr. Klug is young but he is definitely old school. And what I mean by that is that he truly practices medicine to help people. And because he is good at what he does. Something that often lost in this modern world of medicine.

Dr. Klug breathes confidence and compassion when you meet him as a patient.  When I asked him why he does hip resurfacing when it costs more than a hip replacement for Kaiser, he said if Kaiser did not let him do what he feels is the best thing for his patients he would not be there. And it would be a huge loss for Kaiser. Dr. Klug hand picks his surgical team which is technically not allowed at Kaiser. His assistant Irene is a jewel and incredibly responsive. And he does 3-4 times more surgeries than required by Kaiser. When I asked him does he make more money for this, he said the pay is the same whether he does 2 surgeries a week or 8. Which of course leads to my next question, why do you do so many surgeries? He said because he likes seeing the results of his work. I hardly need to say more.

Dr. Klug explained to me that my hip was a slow degenerative process versus some patients that go from bad to terrible within 6 months. This would affect my recovery also since not only would I need to heal from my surgery, but I would need to build up strength that was lost over the previous 3 or 4 years. I am 50 years old, 5-11", 170 lbs and very active and physically fit.  My hip degeneration kind of snuck up on me, like the frog in the pot on the stove. People would often say that I was limping but I would not even notice I was getting weaker. Dr. Klug guessed that I either had a problem at birth or due to some accident.

I played college tennis, skied all my life, did backcountry running, and had more than my share of mountain bike endo's so an injury could have happened at any time. During the three year period other things happened to wake me up to the extent of the problem aside from the pain. I ripped my Achilles tendon, pulled my hamstring, twisted my ankle, and pulled my quad muscle, all on my right leg. I got an X-ray about two years ago and the local doc said I am a candidate for hip replacement at any time and the final timeline would be completely up to me.

It was at this point that I had a chance encounter with a fireman friend who put me in touch with a fellow hippy, Nancy DeMattei. Nancy put me in touch with Vicky Marlow from surfacehippyinfo.com. I owe a lot to Nancy and Vicky. I was two weeks from a total hip replacement since that is the normal protocol at Kaiser. After speaking to Nancy and Vicky and spending some time at the surfacyhippyinfo site, I was convinced I wanted a resurfacing procedure. At Kaiser, you need to get a referral from your specialist and my doc was against hip resurfacing. He had over 30 years experience and to him the hip resurfacing was not adequately proven. I got the courage to ask him for a referral which he did. Vicky was instrumental in steering me to Dr. Klug due to his experience and past successes

In hindsight I wish I would not have waited so long.  For me, the pain was not completely debilitating. I could take some Motrin and keep playing tennis, or bike ride, or climb a mountain, although the doc wondered why I was not in a wheelchair based on my x-rays. When the surgery date approached, Dr. Klug was a little concerned that I would not be a candidate for hip resurfacing. Apparently the ball side of my hip was shaped more like a rectangle, and the sides did not curve back into the neck. According to Dr. Klug this would make it difficult to get the angle right for the prosthesis. Dr. Klug decided to use an anterolateral approach (if you put your hand in your back pocket, the scar is about where your thumb would be) which would give him a better view of the deterioration and to set the angle of the prosthesis better. 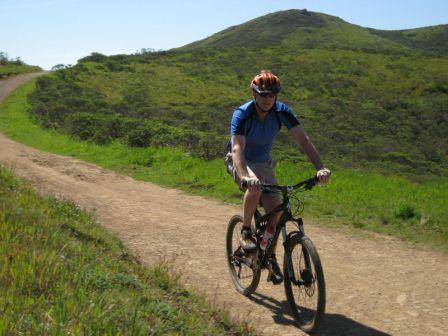 One thing I wanted to relate was something Dr. Klug said to me at my 6 week appointment about why he used the anterolateral approach. During the surgery and after he had exposed my hip socket, he was still unsure he could perform the hip resurfacing procedure. As I previously mentioned, the lack of bone definition on the sides of the ball would make it hard to get the angle right. Dr. Klug said he pulled back and viewed the situation while everyone in the operating room waited. I envision he was looking at my hip like a piece of sculpture he was about to create. He drilled the guide post by gut feel and then he used a monitor to make sure it was in at the correct angle. When it was, he knew he could proceed.

I am not an expert, but I think the anterior lateral approach can make for a slower recovery. This approach cuts through your butt muscle and since I am a thin guy, there isn't much muscle back there for me. In other words, my recovery was pretty slow. And I will say, on the painful side. I have a platelet issue so they recommended I go under general anesthesia instead of an epidural to reduce risk of damage to my spine. I guess an epidural keeps things numb for a few days. The next morning after my surgery when they asked me to get up with a walker, I nearly passed out. They quickly checked my blood pressure to see what was wrong but I knew what the problem was. There was some serious pain going on. This happened again on day two. I originally wanted to get off the pain meds as soon as possible since drugs are a bit against my beliefs. But my beliefs quickly went out the window when I would wake up in a pool of sweat from the pain. This lasted at least a week. Week two was a bit better and I was able to get off the morphine sulfate and use Hydrocodone. Although, not being able to sleep on my side must have taken a toll since I threw out my back at week two. This slowed down the process and as I tell people now, being able to sleep on my side was perhaps my biggest source of celebration. I was not able to sleep on my right side until week 4 and on my left side until week 7.

Week three pretty much consisted of using a walker and trying to do simple physical therapy. But if I pushed the PT, there was a loud wake up call in the evening telling me to back off. At 10 days I had my staples removed and then started swimming and walking in a pool. This was great therapy. I also found that I could walk on a treadmill using the rails for 10 minutes at a time. I bought a cane at week 3 and I really started pushing the PT by week 4. I had my first appointment with the Kaiser physical therapist at week 3 and then again at week 5 and week 7. I started walking without a cane at week 5 but my PT said even at my week 7 visit, that I should still be using a cane based on the way I was limping. His concern was that I could tweak something else in my body.

Now it is the end of week 8 and I did my first long walk without a cane. I have been riding a bike for a few weeks now. My hip flexor is still tight and my butt is weak but I feel that the worst is behind me (no pun intended). I even went out and hit some tennis balls today

And I am incredibly thankful to Nancy, Vicky, and of course to Dr. Klug and his great staff.