I love this subject. I searched the web for months before my surgery back in nov of 06 for info. There was less back than and it wasnt until Corey started posting about his running that this took off.

I have been racing since 5 months after my surgery. I did Mt Washington at 7 months and my first marathon at 1 year. Now I am racing once a month, usually a 10 miler or half marathon and my times are improving.They aren't what they were when I was 25 but my half marathon time is down to 1:36 since my surgery and at 55 I feel good about that. I also run on all surfaces. I don't have a problem on pavement. I tend to think its not the surface that is the problem but the way I run. When I run across the ground as opposed to into the surface I find I create less stress on my body. It also seems as I go faster its less stressful. So running a 7 min pace although is more tacking aerobically it feels better when I am done. I also did no physical therapy after my surgery and I don't warm up before my runs.

I have a stretching ,yoga, feldenkrais routine I do in the morning and than a little all day so when I go for a run I usually have my body prepared.I run 30-50 miles a week. cycle about 4 hours a week and I have done about 30 races including 4 marathons since my surgery. I suppose I might eventually hurt my hip again but I am having such a blast right now I think its worth it. Again I have to thank Dr Su for his help.

Good luck to all you guys out there running and I hope we meet on the road some day.

Today is my 2nd anniversary. Celebrated yesterday by going for a 21 mile run. Actually I'm training for the dallas whiterock marathon in dec but the day gave me some extra motivation. I am still very grateful for this group and leading me to Dr. Su. getting my hip resurfaced is still one of the most amazing events in my life. In 2001 I did my last marathon and I thought I would never run again. Since November 15, 06 I have done 2 marathons, 3 30ks, 7 1/2 marathons and 10 other races of various lengths. Hip feels great. Only complaint is I thought my golf g ame would I'mprove but alas I was terrible before new hip and I still am terrible. Got to talk with Dr. Su about that. I love the stuff from other athletes out there. Makes me feel like I'm not the only nut in the group again. Thank you for this wonderful community. Truly a blessing. Bradley Poster 11/15/06 rc+ Dr. Su 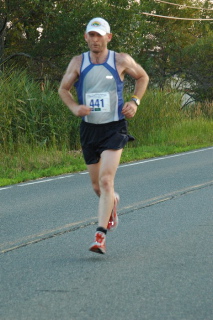 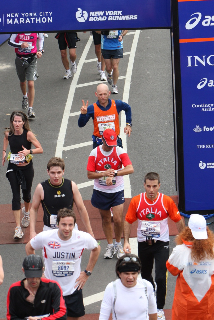 I dont consider myself in the s ame catagorie as Corey or Floyd, so all of you out there wondering if there is a running life for mere mortals after getting your hip resurfaced I say "Get out there and run." For my 1 year anniversary I am doing the NYC marathon. Next year I might hang out with Jack Lalanne and pull a boat across the San Francisco Bay with my teeth. It feels good when the pain is gone.

Best wishes to all who have had this and those doing it in the future,
Bradley Poster
11/15/06 Dr. Su rconserve+

I would like to thank you all who have posted your wisdom on this site. I am very grateful. Here's my story: I'm 51, married two children 22 and 18. I live in Vermont but I'm a new yorker. was a triathelete and marathon runner and stopped in 2001 and switched to endurance mountain biking. I started checking my hip out in 2001 and was told I needed a THR. I'm also a trained feldenkrais practitioner so I figured I would just work with the pain. 2003 I saw a doctor up at dartmouth hichcock. He wanted me to have the THR. I didn't like him.

In 2005 I figured I should get this taken care of. I saw Dr. Maynard at hss in august of 05 and he told me I was a candidate for hip resurfacing which I had never heard of before. He said I should wait 2 years till he had done a number of them and the fda would have approved it by then. I was still racing a lot but walking was getting harder and harder. Last winter was tough so come the summer and hearing about floyd landis I figured I shouldnt wait. I saw Dr. Maynard again and even set up an operation date for october but as the tI'me passed and his office kept screwing up a lot of things and realizing he wasnt very experienced and thinking about him telling me he could do a THR if he made a mistake I decided to cancel.

Than I found surfacehippy and found Dr. Su and got a surgery date for January 11. I told Laura if there was a cancellation I would love to move up. It didn't seem likely. On Tuesday November 7th Laura called me and asked me if I was sitting down. I thought she was going to tell me my surgery has to be pushed back. Instead she asked me if I could do next wed. I was stunned. At first I didn't think it was possible. there are so many things going on in my life right now. I have been training for the operation as if it were a race and the truth is I was ready but I wasnt expecting this. So on wed the 15th at 3, I went in for my surgery.

Dr. Su had told me that I had cysts and it would be possible that I wouldnt get a resurfacing but I trusted that if it didn't happen it wasnt meant to be. I like Dr. Su a lot and everyone here at hss talks highly of him. nurses have told me that they recommend him to their Fridayends. So as they wheeled me into the surgery room I was pretty comfortable with my decision. I was planning on staying awake but either they gave me more versed than they told me or I just dont remember a lot but I did come to during the end and it was pretty cool. I asked right away and was told I did get resurfaced. by 5, I was in recovery. I was doing fine till I had a cramp in the back of my thigh and I was in agony for about 45 minutes. I c ame out of the numbing of the legs faster than they expected and for what ever reason the pain got ahead of me. I got a room by 9. felt pretty good. my intention was to get off the meds as fast as possible. I stopped pushing the button by the morning. I got vicoden at 7 am and than at 12. epidural out at 1. I wanted the catheter out also. by 3 pm it was really bothering me. At 4 it was taken out(probably the worst moment of the whole thing) and than told if I dont pee by midinght it goes back in. I couldn't pee if you held a gun to my head. For the next 3 hours I drank and drank and finally the flow c ame and now I can't stop. Started Tylenol at 4 and have been only taking that. I have been up and walking with walker and Dr. Su told me I have no restrictions which he said means no 90 degree rule. He wants me 3 weeks on cruthes and than a cane.

It's now almost 6 am on Friday morning and I am lying here in my room amazed at how fast this has progressed. from all that I have read I knew there was no way of knowing how it would go. I have never had surgery before. I also know my recovery is just starting and I could hit some bumps in the road but from doing races that last 24 hours I am use to the ups and downs that come with the territory. Also I can't say enough good things about Dr. Su and this hospital. I am amazed at how wonderful everyone is. I write all this as my thank you to this group. It is you that has lead me to Dr. Su and this operation and preparing for it.

You have touched my soul and I am forever grateful,
Bradley Poster
11/15/06 r-bhr su