Some folks know that I had a hip operation in 2006. After reading the news in last months newsletter concerning the Corporate Track and Field meet, some of them asked how I could run full tilt in a 100-meter sprint (we even won our heat) after such an operation. So, after prompting, I wrote this article.

My right hip started hurting in 2002. It was diagnosed as arthritis, possibly brought on by a very minor case of dysplasia (shallow hip socket, a birth defect). In the “before” picture (2005), you can see the “lumpiness” of the femoral head (normal is smooth and round). The doctor said that I would probably need my hip replaced in my forties. He was wrong – I was 39. 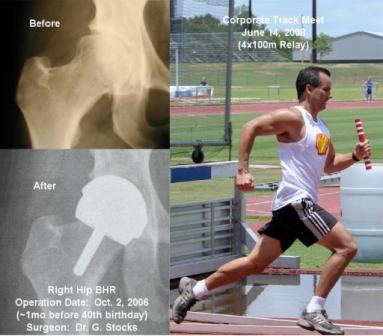 With time came decreasing range of motion and increasing pain. My hip would also tend to “lock up” when I sat down. Cold, damp weather was the worst. The first quarter 2006 set of Turnarounds, where I worked nights, was pretty tough (especially climbing scaffolds).

Just before surgery I could barely tie my shoes. Sometimes I’d ask my children or wife to remove my shoes and socks. My limp was causing me back pain. The worst part was not being able to play well with my kids.

For most folks, the recourse has been a Total Hip Replacement (THR); however, in May of 2006, the FDA approved a new device, the Birmingham Hip Resurfacing (BHR) System. Resurfacing is primarily targeted for active individuals who wish to stay active. This device requires less bone removal than a THR and is less invasive to the remaining bone. The best way to illustrate this is with a picture. To the right is an x-ray of a patient (not me) with both a BHR (left) and a THR (right).

I was lucky. When I visited my doctor to schedule a THR, he told me about the pending approval of the BHR and suggested I wait until then. My operation occurred October 2, 2006. The doctor’s name is Dr. Gregory Stocks and he works with the Fondren Orthopedic Group in Houston. I was his 12th BHR. He has now installed over 100. And yes, our United Health Care Insurance covered everything (minus deductible).

The longevity of the device is unknown. This is a good thing since folks aren’t wearing them out. Hip resurfacing is common outside of the U.S. with several hundred thousand installed in the last 15 years. There were some early issues at the start but in the last several years the revision rate is as good as or better than Total Hip Replacements. In fact, some BHR recipients are running marathons and participating in Ironman competitions. Studies have shown that they are not wearing out the device or harming their bone.

Nowadays, if you drop by my house you might find me throwing the football, playing Frisbee or kicking the soccer ball in our yard with my wife and kids (as well as neighborhood kids). I have no limits; in fact, in an internet hip forum in which I participate I have adopted the following signature: