Lequesne introduced a radiological projection, which is an oblique view of the edge of the acetabulum, to diagnose arthrosis affecting the anterior part of the joint and to measure the anterior coverage of the femoral head. In this study, we attempted to determine the anatomical correlation of his technique. Fifteen in vitro hemipelvises underwent radiography according to Lequesne's description, using metallic markers and wires to mark physical landmarks. According to geometric laws, the points used by Lequesne do not correlate anatomically. Although Lequesne's technique allows a diagnosis of acetabular dysplasia, measurements are on average 5.5° less than those made anatomically. The French version of this article is available in the form of electronic supplementary material and can be obtained by using the Springer LINK server located at http://dx.doi.org/10.1007/s00276-002-0038-1. 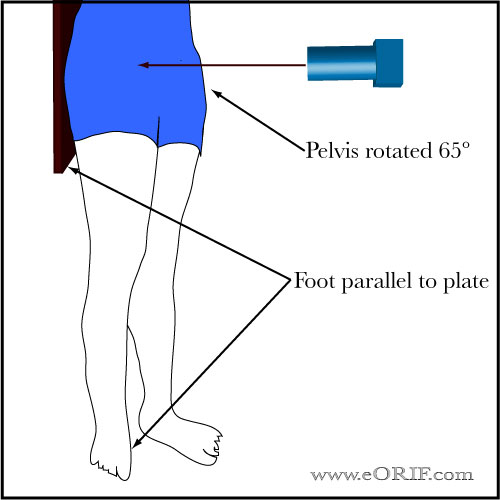 Position: Patient standing with the affected hip on the cassette, the ipsilateral foot parallel to the cassette and the pelvis rotated 65° from the plane of the cassette.
Beam: centered on the femoral head perpendicular to the cassette