LATEST NEWS ON RECALL OF THE ASR DEVICE

BMJ Video interview with Tony Nargol, Tom Joyce and David Langton on results of the ASR that their Centre experienced

BOA Accelerated Failure of the ASR XL at North.pptx

RESPONSE TO ABC's 4 Corners Program in the UK Click here

For more Articles related to this

And click here for these other realted articles from JBJS

DePuy has provided me with this information to share on my web site, for more detailed information go to their website, www.depuy.com.

Click here for the patient information page on our web site

Click here for an image of the ASR Hip System

Patients with an ASR Hip are asked to the form and bring it with them to the appointment to give their surgeons permission to share information directly with DePuy.

This notice was shared with hospitals and surgeons regarding the ASR recall.

Additional resources concerning the DePuy ASR can also be found at DrugWatch.com, which offers extensive information regarding medical devices used by both medical professionals and the public. To visit their site click on this link which will take you directly to info on the DePuy Hip Recall for more information.

**Last fall (2009), Depuy decided to discontinue ASR® XL Acetabular Head System and DePuy ASR® Hip Resurfacing Platform (not available in the U.S.) worldwide.   As a result of declining demand for the ASR platform and other market factors, they are in the process of phasing out this platform to focus on the development of next generation hip replacement and resurfacing technologies that best meet the needs of surgeons and patients.**

"We want to assure patientswho have been treated with a device from the ASR platform that there will be options available to them in the future should they need a revision:

Finsbury Orthopaedics has set the standards in metal-on-metal design and manufacturing technology since the early 1990s. The ADEPT® Hip System is the accumulation of our experience and includes both resurfacing and total hip options. 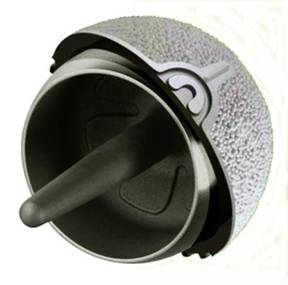 Uniqueflexibility of sizing is provided with 2mm incrementson the head which allows for two cup sizes for every head and two head sizes for every cup. Not only is this feature bone conserving, it also assists with optimising the range of motion.

The critical features of the ADEPT® system and technical rationale are based entirely on clinical history rather than short-term mechanical studies. The ADEPT®metal-on-metal resurfacing system follows well-established clinical history and has evolved from the Ring hip and Birmingham Hip Replacement.

The parallel stem inside the resurfacing head prevents cement migration into the femoral neck during impaction. The tapered section outside the head avoids intimate bone contact within the neck which reduces the riskof load transfer and stress shielding.

ADEPT® Cup
The cup has an as-cast beaded structure for bone ingrowth which is encouraged by a coating of hydroxyapatite.

The beaded surface extends from the edge of the cup right over the pole providing the maximum opportunity for bone ingrowth and secure fixation.

The range of motion before neck infringement has been optimised and found to be superior to other competitive systems. 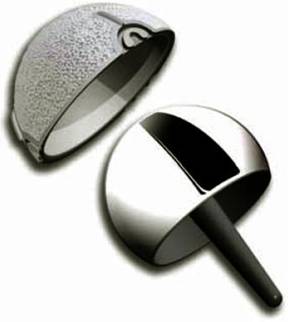 Simulator testing on competitive devices has concluded that the life of ametal-on-metal implant is bi-phasic (bedding-in followed by steady-state wear). Retrieval analyses however show that metal-on-metal implants do fail and therefore there is a third phase to the life of theimplant. All three stages of life are predictable and a function of theinitial design.

Simulator studies stop during the steady-state wear phase and often onlyextend to five million cycles which, depending on the patient's activity levels, only represents a lifespan of one to five years. The ADEPT® technical rationale is entirely based on clinical history dating back over 25 years.

Differences between coverage of the BHR and the ASR devices 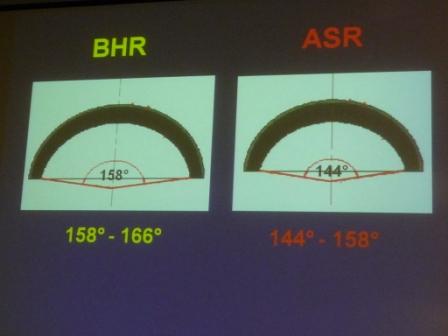