These three types of prostheses are part of a modular system that can be adapted to the age and activity of the patient and to pathological changes in the joint. All three have the same high quality and wear resistant metal on metal bearings.
1.) Hip resurfacing according to McMinn - Birmingham Hip Resurfacing (BHR)

Arthritis due to Dysplasia of the Hip BHR - Resurfacing on both sides
Right hip: severe bone loss and leg shortening. Restoration of acetabulum and leg length by fixation of an acetabular cup with anchoring screws and bone grafting into the dysplastic hip (Dysplasia cup).
Left hip: Standard resurfacing device.

With this method, in contrast to conventional prostheses, only the damaged surface parts of the hip joint are removed. The femoral head and femoral neck are conserved. The femoral head is capped with a metal cup which similar to the thin walled acetabular cup consists of a special cobalt-chrome-molybdenum alloy with a high carbon content. The manufacture and processing of this cast alloy is based on the metal on metal prostheses of Peter Ring (1964) and McKee- Farrar (1966) which in individual cases remained free from wear or signs of loosening over a period of thirty years.

Tests carried out with these prostheses indicated however that a high standard of precision of the components is a prerequisite for their longevity. At the time this was not routinely achievable so that the majority of the prostheses failed at an early stage. As the technical correlations were not recognised, metal on polyethylene articulation was chosen, and introduced for example, by Charnley (1958) with his total hip replacement prostheses.

The concept of hip resurfacing was first applied clinically from the mid-1970s into the early 1980s by Freeman, Wagner and Amstutz. The principle was followed in several other countries. The results were mostly disappointing as the high degree of wear of the synthetic acetabular cup through friction with the metal or ceramic head caused osteolysis and component loosening.

The reason for these early failures was the polyethylene used for the acetabular cup. The large femoral head caused extreme abrasion on contact with the rough polyethylene which set up a chain of biological reactions and resulted in bone loss and loosening. Tests done on femoral heads with cups indicated that the loosening of the prostheses was not a result of impaired blood supply of the femoral head. 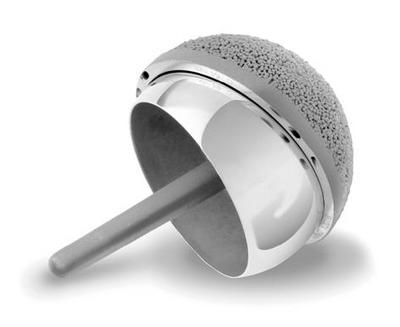 The poor results with hip resurfacing in the seventies was therefore due to poor hip resurfacing systems. The recognition of this following clinical evidence meant that in 1989 the metal on metal pairings were reintroduced for conventional prostheses. It also meant that in 1990, McMinn began to develop a hip resurfacing technique based on metal- on- metal articulating surfaces. Because of past experience in general, the McMinn concept was slow to gain acceptance. However after the first publications in 1996, other prosthesis manufacturers began to copy the concept so that today nearly all leading manufacturers offer hip resurfacing prostheses. Deviations in the metals employed, the design and the operating techniques used can lead to different results.

The resistance to wear through lubricated friction and the very low risk of dislocation means that patients can participate in many types of sport without experiencing adverse effects where conventional prostheses cannot be recommended. This is also true for occupations which cannot be pursued with a conventional prosthesis or only at great risk.

For over sixteen years and with more than 70,000 patients, the original McMinn implants (Birmingham hip resurfacing) have given excellent results which have been confirmed through numerous scientific publications. This is consistent with our own experience with over 1600 implants.
2.) Birmingham Mid Head Resection (BMHR)

Resurfacing is only advisable when the stability of the bone and the shape of the femoral head offer sufficient support for the prosthesis. With healthy and active patients who do not meet these requirements but who can benefit from a bone conserving process, the Mid Head Resection can be an alternative to a standard prosthesis.

With this prosthesis, the fixation of the femoral component depends less on the bone of the femoral head but more on the stability of a titanium stem with bone ingrowth in the femoral neck.

Those parts of the femoral head which have been destroyed by cysts, circulatory disorders, malformations or involution due to arthrosis are removed. A titanium stem adjusted to size is implanted into the healthy part of the femoral head and neck, which is fixed by bone ingrowth (combines with the bone) and strengthens the femoral neck. In this way the implant-bone compound can withstand bending and torque forces.

Through the use of this implant, an opening of the femoral medullary cavity can often be avoided by implanting a prosthesis stem. The advantage of resurfacing is retained.

If extensive damage to the femoral head and neck has occurred or in cases of osteoporosis, where bone conserving prostheses cannot ensure long term success, there are also clear advantages in using the metal on metal joint articulation for conventional prostheses. By using the same acetabular cup used in resurfacing and with an appropriate modular head, risk of dislocation is greatly reduced and low levels of wear can also be achieved.

With older patients who tend to have an increasing lack of coordination, a weakening of the muscles and a higher risk of falls, this prosthesis can also be advantageous because it mostly prevents dislocation and thus further operations.

Also in those rare cases where a fracture of the femoral neck has occurred, the use of a modular femoral head and a prosthesis stem while retaining the acetabulum can restore the function of the hip joint. This ensures minimal wear and a large range of motion.