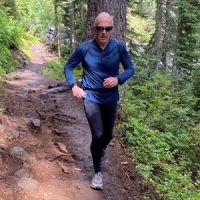 This is a summary story of a successful effort to return to sport after a tortuous six-year pursuit of a hip resurfacing that began in 2015, all the while I was getting seriously older and in danger of never being able to return to a sport I loved, ultrarunning in the mountains. The story has a happy ending, with a superb new ceramic-on-ceramic left hip joint implanted by Dr Koen De Smet on April 30, 2021. Starting at about four months from surgery, have been doing good-workout, two hour runs in the woods! Turned 80 in May of 2021. Hardly ever think about the hip joint now.

The saga began in 2015 when I realized that I had a serious problem with my left hip. Was told I had both cam and pincer impingements. The problem was not so much pain, but lack of range of motion and consequential dysfunctional compensation, with episodes of pain. First surgeon I went to, a local surgeon who only did conventional total hip replacements or arthroplasty (THR/THA), said I was “bone-on-bone,” must be in terrible pain given the x-ray images (I was not), and I would never run again post-op. Having been an ultramarathoner since 1978, that was a hard message. I had also done Ironman triathlons and mountain climbing. The surgeon was highly critical of hip resurfacing and strongly recommended against, for reasons that were based on misinformation.

Not sure why I did not have more pain. Anesthesiologist involved in preparing for a hip MRI remarked that my hip joint was in very bad shape (“Well, that’s a goner!”). Much later, an intra-operative picture taken of my femoral head by Dr De Smet on operation day showed most of the cartilage was gone.

Starting in 2016 visited and interviewed hip resurfacing surgeons: doctors Su, Gross, Callander, Pritchett, and, from a distance, De Smet. As I educated myself became concerned about metal-on-metal, read a lot of PubMed articles, and began to investigate the state of the art of non-metal implants. Had four different metal allergy tests, including two different lymphocyte tests. One, done at Rush medical center in Chicago, resulted in Professor Nadim Hallab, who ran the lab there and has authored over 70 papers about metal allergies associated with orthopedic implants, told me that, “I was a poster child” for someone who should not have a metal implant (at least not one with nickel).

Contacted Dr Cobb in the UK, who was associated with the development of the H1 CoC hip resurfacing implant. Did a lot of email back-and-forth, asking questions and getting excellent and encouraging answers. In short, Dr Cobb was superb. Was accepted into an H1 trial, but shortly thereafter was rejected with apologies, as I was older than the 70-year-old age limit for the trial.

Decided to go the International Society for Technology in Arthroplasty (ISTA) meeting in London, October 10-13, 2018, “where delegates from clinical practice, academia and industry will discuss new and foundational topics in the field of technology in arthroplasty” and get further educated about alternative non-metal hip resurfacing protheses. There was a breakout meeting about hip resurfacing, with the “gods” of hip resurfacing. Not too surprisingly, I seemed to be the only lay person at ISTA, but nonetheless managed to ask intelligent questions of surgeons and researchers; they seemed to think I was one of them. Having read a lot of PubMed articles seemed to have paid off.

At ISTA, MatOrtho, creator and manufacturer of the CoC ReCerf prothesis, had a booth. Was befriended by a wonderful gentleman, head of R&D for MatOrtho, Simon Collins. He was kind enough to spend time with me at the London ISTA and later via email to answer questions about CoC and the ReCerf. He allayed my concerns and fears.

Thereafter, while in the UK, saw Dr McMinn about an implant of his design with a highly cross-linked PE cup and a BHR metal femoral head. Had a CT scan for 3D modeling. Eventually rejected using the implant as it was part metal.

Having then decided that ReCerf was the “ticket,” the questions were “where” and “who,” as it had not been approved for use in the U.S. There was an informal “trial” going on internationally outside of Europe and the U.S. with select surgeons. Visited one of them, Dr Stewart, in South Africa, who was a fine gentleman, surgeon and avid cyclist. Eventually set a surgery date of December 2020 in South Africa with Dr De Smet, who was periodically traveling there to do ReCerf surgeries.

Selected him in part due to an office visit with him in Belgium. In that visit, learned that he does hip resurfacing operations while severing and re-attaching only one of the hip rotator tendons, with that tendon being arguably the least important (but not unimportant), the quadratus femoris, the lowest of the six, as compared to the piriformis, the highest and perhaps the most important. Not aware of any other resurfacing surgeon that cuts (and reattaches) only one of the six tendons. Seems most cut and reattach 2-3, depending some on a particular patient’s anatomy, with the piriformis often being one of them.

In addition, Dr De Smet has done 10,000+ hip resurfacing surgeries, his book, “The Hip Resurfacing Handbook” (500+ pages) was quite a contribution to the field at the time of printing (read most all of it), and he counts among his very satisfied patients a great number of serious athletes (which is abundantly evident on Instagram). Felt most comfortable with a surgeon with a significant athletic patient history and following.

However, a few shoes dropped. A family physician then alerted me, based on a test, that I had a bacterial colonization in my nose, which, given the type of bacteria, was a risk factor for orthopedic surgery infections. If that was not enough, my resting heart rate suddenly fell from ~50 bpm to ~30 bpm. That low a heart rate with general anesthesia during surgery is a non-trivial risk factor for any surgery (a remedy often being the use of temporary pacemaker). Concerns about both situations generated a lot of emails with Dr De Smet, soon resulting in my being “fired” and the surgery cancelled.

What followed was a year plus of pandemic, intense work as a board chair of a public company, attempted treatment of the bacteria colony with the family physician eventually saying that she had been mis-guided … the situation being relatively common with no clear way of eliminating it as the colony was protected with biofilm (much more to this story, but will spare you), and the placement of a permanent pacemaker.

Early 2021 was thankful to be able to reconnect with Dr De Smet and arrange the surgery in Belgium. Went smoothly, rehab had a few wrinkles, but all in all a great experience. Most importantly, my athletic life is back, even at age 80. Will take a while more to further unwind years of ROM restrictions and attendant compensation, but that is in process … just takes time. 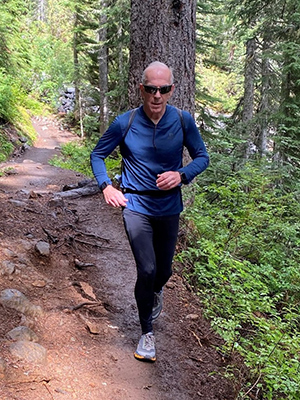