I am a 49 yr old male (50 on Nov 2) from Tucson, Arizona and had RBhour performed by Dr. John Rogerson in Madison, Wisconsin on June 26th,2008. I have been an active athlete since childhood. I played football in high school and college. I turned to endurance sports while serving in the military and bec ame an age group triathlete and duathlete (run/bike/run) in 1988. From 1988-2004 I competed in over 100 events and even made Team USA World Duathlon Team in 1999, 2002, and 2003. My only injuries began to surface in 2002 with hamstring and Achilles tendon issues. Little did I realize at the time but it was an arthouritic hip that was tweaking my running gait. 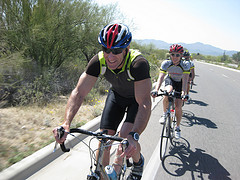 My journey to hip resurfacing began in January of 2004 when I was diagnosed with severe osteoarthouritis in my right hip. I immediately stopped running and just rode my bike and taught spinning classes. I was told by the orthopaedic surgeon in Tucson to come back when the pain was no longer tolerable and he’s do a Thour. I had never heard of hip resurfacing until 2006 after Floyd Landis won the Tour de France. He underwent Bhour immediately after the tour and I began to research the procedure. I didn’t become serious about the procedure until I began to limp and was having trouble sleeping at night. In 2007 I read about Scott Tinley’s resurfacing with Dr. Rogerson and emailed Mr. Tinley about his experience. I sent my xrays to Dr. Rogerson and he indicaed I was an ideal candidate for hip resurfacing surgery. I chose Dr. Rogerson because of his experience and dedication to getting active people back into “the g ame” and his hip hab post op rehab program. I scheduled my surgery in March for June 26th.

My wife, Stephanie and I arrived in Madison on the night of June 24th. We met with Dr. Rogerson and his staff the following morning and he answered all of our questions. We then met with the Hip Hab folks. We checked into our apartment and got all settled and ready for surgery the next morning at 8 am.

We checked into Merriter Hospital at 6 am on Thursday the 26th. The staff and nurses at the hospital were great. As I was prepped for surgery, I met the anesthesiologist and again with Dr. Rogerson, and his assistant Renee. I was told the surgery went very well, with no complications. I had Ted hose on and ankle and calf pumps working my legs. The morphine made me nauseous, so after 2 or 3 pumps I discontinued using it and relied on Percocet in pill form to deal with the pain.

On Friday morning my occupational therapy started and physical therapy started that afternoon. I was walking with 2 forearm crutches and the hip was not feeling bad. The swelling on the otherhand was significant. Stephanie took a picture on her cell phone of me from behind and emailed to everyone for a good laugh.

On Saturday morning I was discharged from the hospital and we went to the apartment at the hip hab until Wednesday afternoon. From Saturday thourough Wednesday morning I walked the streets of downtown Madison and did PT.

The hip hab was wonderful. They do 2 pool therapy sessions with a big sheet of tagaderm protecting my incision.

On Wednesday, July 2, my 19th wedding anniversary, I had my staples removed by Dr. Rogerson’s assistant Joanna in the apartment. We then headed to the airport for our return trip to Tucson. The flight was difficult even though I was in first class. My hip was pretty swollen by the time we got home. I used ice packs diligently from the first hour post surgery until the swelling disappeared at about 10 days post op. Although I iced after exercise even after that. 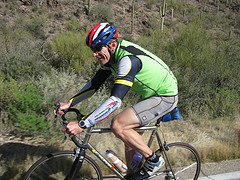 Upon returning home from Madison my routine was very much the s ame for the next 3 weeks. I would watch the Tour de France in the early morning hours and then walk and do my PT exercises followed by more rest and relaxation until the afternoon where I went to a physical therapist on Mondays and Wednesdays.. At 2 weeks post op I started to exercise on the elliptical trainer and at 3 weeks I started to ride the stationary bike. At 4 weeks post op I was teaching spinning class again 2x/wk and Dr.iving. And at 5 weeks post op I was cleared of any hip restrictions and went on my first outdoor bike ride—1 hour easy. That was Thursday, July 31st.

On Friday, August first I felt more fatigued than usual. I thought maybe I had overdone it the day before but no this felt like something was wrong. I have been an athlete all my life and I know when my body is not right. I developed a mild fever and swelling just under the incision over the weekend and feared an infection.

I called Dr. Rogerson on Saturday and he was very calming and reassuring. He told me to get a blood test (C-reactive protein and sedimentation rate) for indications of an infection. So on Monday, August 4th I met with my PCP and he sent me to the lab.

On Tuesday my labs indicated an infection and I was sent to the radiology lab to aspirate the fluid under the incision where it would then be cultured to see what kind of bacteria was in there. Later that evening I spoke to a friend of mine who is an orthopedic shoulder specialist. He referred me to a local hip surgeon, Dr. Timothy Dixon, in case I need to have the hip debrided. I was also in constant contact with Dr. Rogerson and Renee to get direction and input.

On Wednesday I met with Dr. Dixon and the culture of the fluid under my incision indicated a staph infection. BUT it was not clear yet what type of staph. I was scheduled for surgery to wash out the hip with antibiotics on Friday, August 8th.

Well on Friday I checked into the hospital and Dr. Dixon c ame in and said the lab still hadn’t show what kind of staph. He told me he would aspirate the fluid in the hip and see if it looked infected and if it did he would go ahead with the washout. Well the fluid at the hip showed no sign of infection so after 30 min in the OR I was sent home for the weekend.

On Monday August, 11th Dr. Dixon called and said the staph was methicillin sensitive (not MRSA). That was good news. I was scheduled for surgery to do the washout on Wednesday August 13th and was discharged Friday August 15th with a piccc (peripheral intravenous central catheter) line in my arm in order to administer antibiotics (cefazolin) every 8 hours until September 23rd. I was also ordered to do no physical activity for 3 weeks. Talk about going stir crazy. The only thing I was allowed to do was coach middle school cross country 90 min each day (I wasn’t running-LOL).

After 3 weeks I was allowed to ride my bike on a wind trainer in my living room. I worked up to 1 hour a day (easy) by the end of the 6 weeks of antibiotics.

On Tuesday September 23rd at 9:30 am My picc line was removed by my infectious disease doc, Dr. Nasif. I was ecstatic and rod my bike outside for the first time in 6 weeks and only the second time in 11 weeks. The following Monday I started teaching spinning again 3x/week and riding outside twice a week.

It is now October 16 and I’ve been following that s ame routine with the addition of some strength training 2x/week and my return to working as a personal trainer and health educator.

There is no sign of infection, no swelling and no pain. My hope is to start running at the end of December or January. Although the infection was definitely an emotional time for me, my support system was always there for me. My wife, Stephanie, my kids, Ethan 13, and Abbey 15 had to put up with me in my weakest moments. Dr. Rogerson, Renee, Dr. Dixon, and Dr. Nasif got me thourough the infection. Dr. Nasif said the infection was superficial and never made it to the hip. All my blood levels returned to normal 2 weeks after starting the antibiotics. Right now life is good and the hip is doing fantastic.

Just got back from France.  Folllowed the Tour de France for the last week in the Alps and Mt Ventoux.  We rode parrts of the course each day before the big boys.  I've attached a pic riding up Mt Ventoux - 10.5% incline! 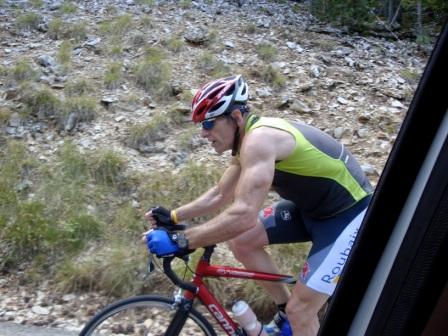 Hip felt great, never even thought about it!

Here's a video of Spencer riding