"Our growing club should have open doors, promoting an active lifestyle is the only price for admission."

Steve Cohan had surgery with Dr. Koen De Smet in Belgium on January 15, 2003. On October 5, 2007, Steve emailed me and asked me to get him in touch with fellow patient and triathlete (name deleted) because his wife had just decided to register them both for the Ironman 2008 in Wisconsin. 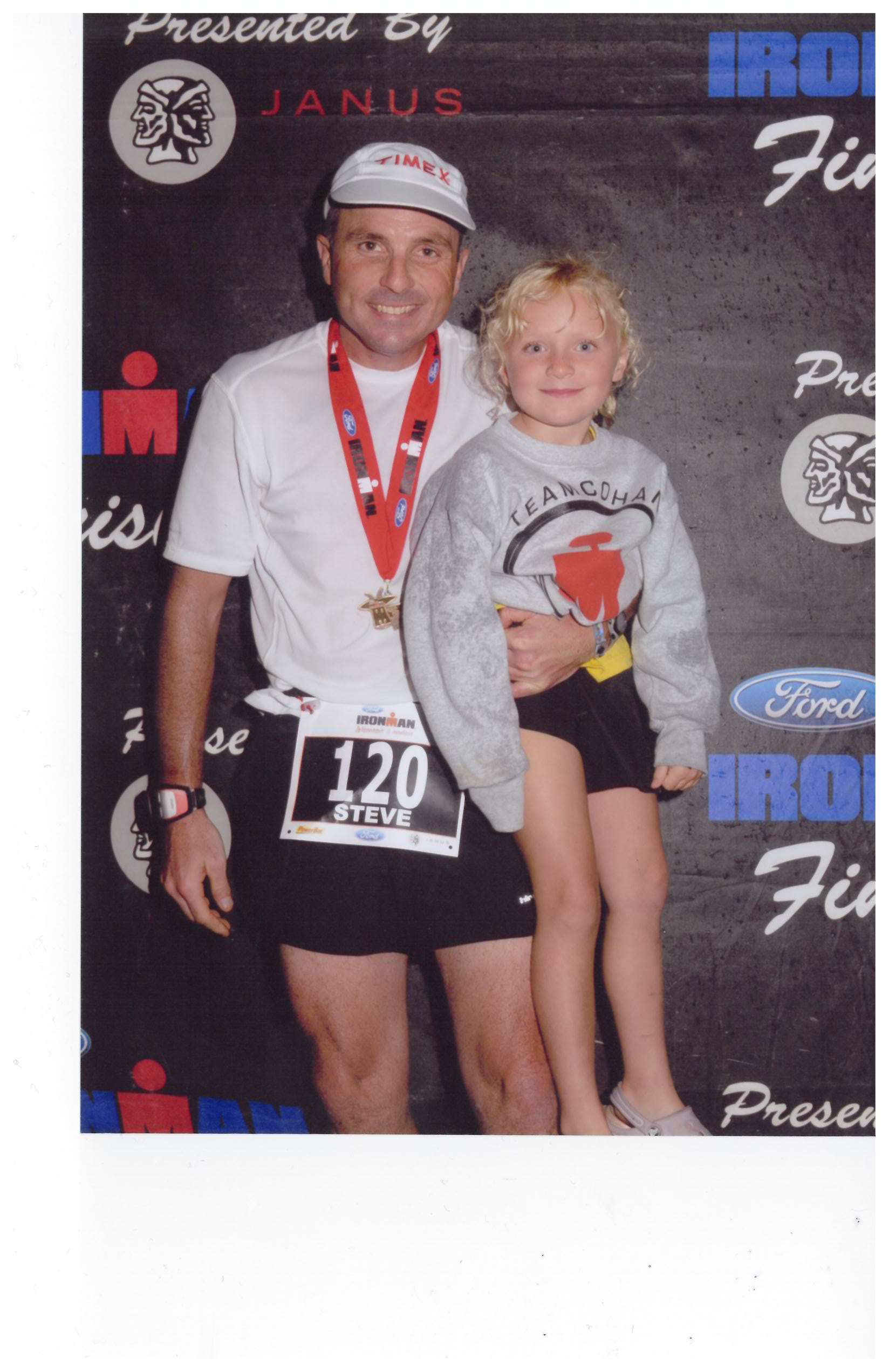 Steve then set the wheels in motion to train for this event. He started training 2-3 hours a day, six days a week. He then entered an Olympic Triathlon in June 2008 an and on July 19, 2008 he finished a ½ Ironman. Then finally on September 7, 2008 Steve finished his first Ironman. Welcome Steve to the Ironman Hippy Team! Steve’s comments below on the event:

Steve: “The course:
Swimming in a lake Monona in front of 10,000 cheering onlookers. Don’t get me wrong, it’s not crystal clear Ocean water and visibility is an issue but the 71 degree temps and flat water was great.

My rugby career most definitely helped in the water. The swimming session was like being in the middle of a scrum, arms and legs were flying everywhere. Like in a rugby game, I was motivated after taking a foot in the nose. No more Mr. nice guy, I sped up by chopping and kicking my way through the mass for at least 45 minutes before finding open water... resulting in a swim time well under the expected pace.

The Cycle course involved two loops rolling through the hilly countryside of Western Dane County. The first 15 miles was relatively flat (not in a Florida sense of flat) but then you go on two loops involving lots of 200-450 ft vertical climbs and quick descents. This part kicked the asses of many people from other regions not prepared for this type of terrain. Those from the mountains who are used to long climbs followed by long high speed descents found these short ups-and-downs to be very confusing. Those who altered their strategy did fine those who didn’t…didn’t. I was great on the hills but lost time on the flats (translate that to “I need work on riding into the wind”). I didn’t go that hard on the bike (2mph slower than training on the course two weeks earlier) with the thought of saving energy for what would be a long and painful run. 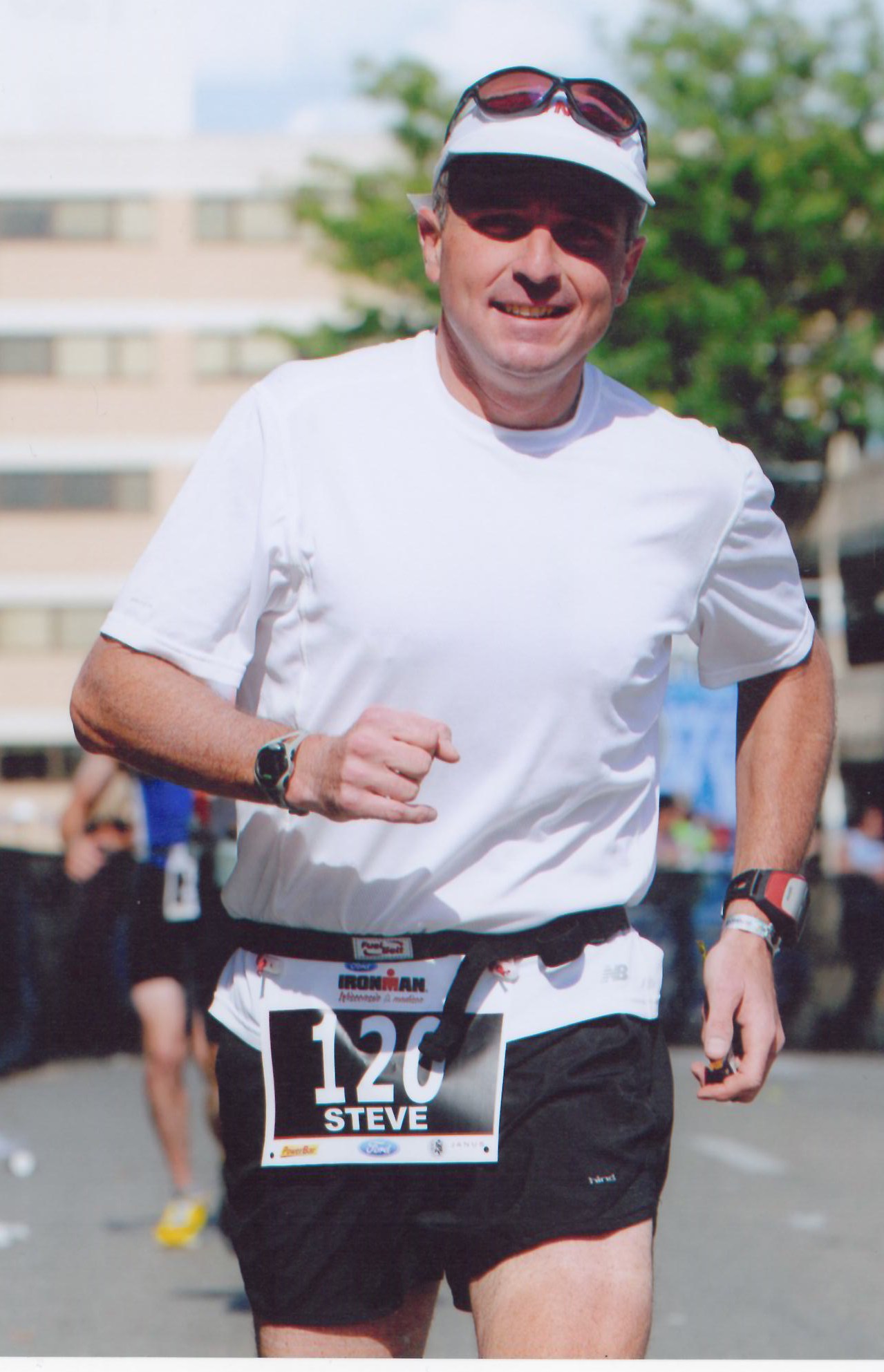 Then we ran through the UW Campus and Downtown Madison. Nice, open and scenic only two difficult vertical climbs but lots of turns and curves. The fans were everywhere and they let you know they were happy to watch the spectacle!

Even though I have been training to run/walk, my hip joint was simply not up to the task of aggressive running so I decided to use a fast walking strategy for the entire marathon. Five weeks earlier during the ½ I.M. I tried to run/walk and ended up walking most of the event anyway…only with tons of soft tissue pain throughout the rest of the race and a painful week of recovery to follow. My fast walk pace was OK and I went faster than most of the racers who shot out like rabbits from the beginning. Next time I’ll put more energy into the bike phase knowing that I don’t need as many reserves for a fast walk.  The proof is that the heart never raised above 120 B.P.M. the entire marathon! 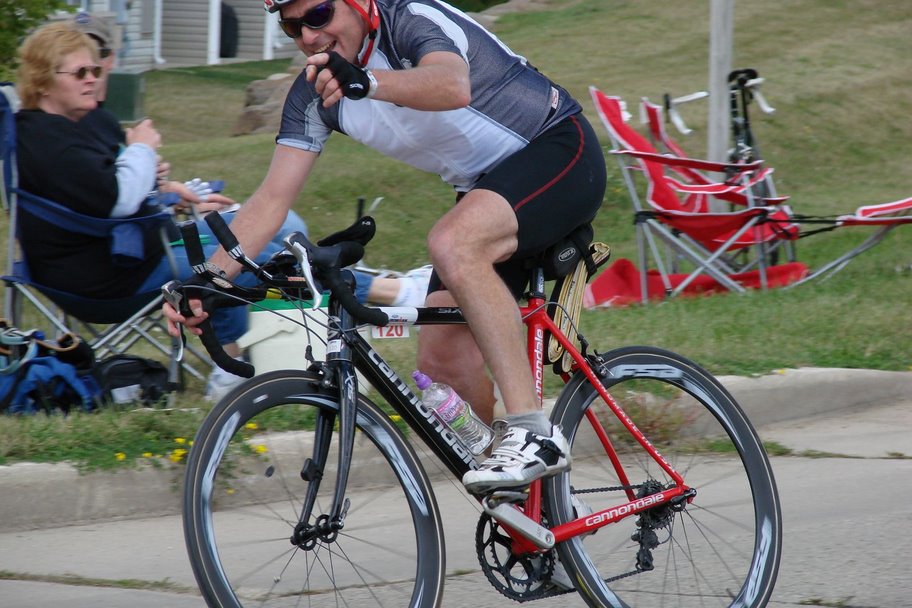 Steve’s personal hip resurfacing story written Sun Jan 26, 2003:
I'm 37, active, in reasonably good physical shape and have suffered from O.A. in my left hip for approximately two years. I decided to fix the problem while I was healthy and other joints remained unaffected. This brief journal is a play-by-play of my visit to Dr. DeSmet, Belgian hip specialist. Note, this journal tells my experience and reactions to the procedure, every patient views these issues from their own personal perspective. Let's board the plane for Europe...

My wife, Jill, and I arrived in Brussels, Belgium Monday January 13th. The highlight of the days sightseeing was the confirmation that Brussels is the home of some tremendous historic sights and Belgian waffles are available throughout the city.

Tuesday was a bit of a whirlwind. After breakfast, we headed to the train station for transport to Gent, roughly a half-hour by train from Brussels. Upon arrival we took a taxi directly to the Hospital.

After registration, the day was filled with X-rays, blood work, interesting conversation with other patients and a late night shaving (you will only get to guess what was shaved). Important note: bring shaving cream if you want to avoid a large razor burn. You will also meet your roommate early in the day; my roommate was Mark Beissel, a Physical Therapist from Michigan. The pairing worked out so well that our wives also shared a room at the Holiday Inn.

Dr. Koen DeSmet came in to meet Mark and me for the first time. He came across as a kind, confident man seriously focused on his work and the patient's well being. The short conversation was informational and comforting for all.

Operation day (Wednesday): A long, quiet sleepless night was completed when an EKG was performed in the room and a nurse wheeled my bed to the pre-op room. I was then transferred to the operating theater at 8:30 and off to La-La Land. I woke up with a very uncomfortable, clueless feeling (even more clueless than usual) which continued the rest of the day. My roommate and I didn't sleep that night, just pain meds and whimpers. The most difficult part was not being able to move my leg.

Day 1 post-op
The nurses wanted none of this "sick" thing so they pulled me out of bed at 8:30am for washing, some tea and a bed change. I rather enjoyed this after a long hard operation day. The rest of the day was all progress as it involved bed stretches and walking late in the morning. Hard to believe they had me walking the day after cutting a 14" incision in my side and replacing bone with a large hunk of metal.

Dr. DeSmet liked what he saw when he came in to have a look at things. His unique, non-arrogant, outwardly confident approach came across in this meeting. He is like no US doctor I have met, imagine Willy Wonka in medical gear and you will be close to understanding Dr. DeSmet.

Day 2 post-op
The day started with lots of walking, sitting at the table for breakfast and a successful attempt to get out of bed on my own. As long as I was on a roll I decided to have a go at the stairs...more success. Willy, the PT guy, is a slave driver with kind tendencies who mastered passive/aggressive therapy techniques while training two professional cycling teams on (somewhere around) 12 annual world tours.

At 2:00 pm I was released from the hospital and transferred to the Holiday Inn hotel for the next four days. Later that day, we were visited by Jan who was responsible for my care while at the hotel. Jan works directly with Dr. DeSmet's clients both in O.R. and in the hotel after release from the hospital. It's a great arrangement to say the least. Jan also works with the patients on the 5th floor...the sex change ward. He mentioned the hospital is the world leader in this procedure and they see up to five people a week from around the world. I'm very glad they checked me into the 4th rather than the 5th floor! Jill and I had room service for dinner and off to bed for a restful night.

Day 3 post-op, Saturday
The day started with a great breakfast in the hotel. Mark, the Belgian Physical Therapist, came in and did his work. My former roommate Mark the PT from Michigan and I were equally impressed with Mark's professional and knowledgeable therapy. Before he left, Mark showed us a map of the places to see here in Gent and recommended a short walking tour as additional PT. I'm not one to let good medical advice go unheard so we headed downtown to see the city. The sights were remarkable, even though Jill and I viewed them at an ultra slow pace. The most difficult part on my leg was getting in and out of the taxi. The rest of the night was quiet in the hotel.

Days 4 & 5 post-op, Sunday and Monday
Not much to report, except good morning PT sessions and afternoon visits by Jan and Dr. DeSmet to check on the wound and general progress respectively. I found it very interesting that the surgeon would make a house call to check daily progress.

Monday included a visit to downtown Gent for lunch and a walking tour of the Castle. The tour is not recommended for those who are not feeling strong yet. The three story stair climb will be extremely difficult if you are not physically ready for the challenge.

Day 6 post-op, Tuesday
Check out and head to Brussels by train. Choreographing the train station was easier than expected, people were very helpful when we needed assistance putting our bags on the train as well as moving them through the stations.

Jill and I arrived at the hotel at early afternoon. We had some lunch, bought some shoes and hit the town to see the sights. The two hour walk was a bit hard on my body but I made it home without issue.

Jill has been a great traveling companion, personal nurse and wife throughout this whirlwind ordeal. An "expecting" woman has many other things to worry about but she has focused on my well being.

Things to bring:
Towels, Tylenol PM (to get sleep at the hotel), soap (for the hospital), shaving cream, sweats, shorts or t-shirt, hotel-sized shampoo, easy-entry walking shoes, snacks for the hotel after being discharged from the hospital, raincoat (it rained most every day we were there), someone to help as required, luggage with rollers.

Things not worth bringing:
Robe (never put it on), quantities of pain meds for after the operation (you will feel good enough not so they won't be needed), sunglasses and tanning lotion (no need, no sun)