This is a rather long narrative, so possible lessons for those not able to endure the length, especially those just now considering HR, are:

I’m a 54 yo male, very active, I travel as a sales rep & have to carry bags & samples, and also am a very much DIY’er, working on not only my house/yard, but also a couple of rental properties I share. I’ve been an avid cyclist since 1975, and for a 12-year period spanning 94-05, completed probably 90+ sprint distance triathlons & other multisport races. I still race bikes in the autumn in a sport called cyclocross, and almost all of my 3000+ miles/ yr are at more or less race pace efforts.  I was able to ride right up to surgery (my bike was my wheelchair). 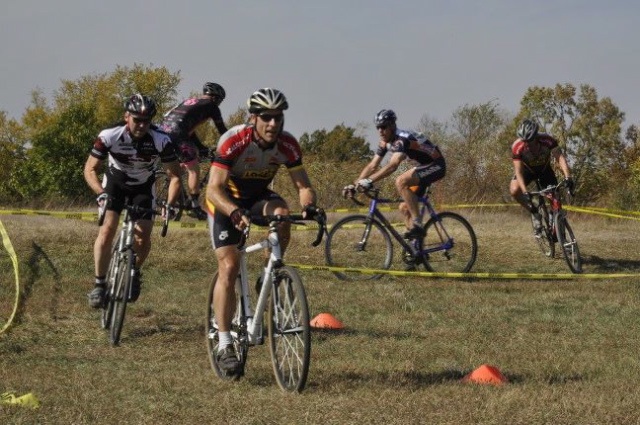 20 months ago, while running, I developed muscular pain in the left leg, and after visiting a masseuse, and a chiropractor with no improvement, the latter sent me to a ortho for a checkup.  At the ortho’s visit, he suggested I had FAI, and said to look into visiting the experts in Vail.

The Vail clinic was completely unresponsive to my calls & messages.

I have a friend who is the local rep for Biomet, and he suggested a different surgeon here for a second opinion.  As luck had it, this surgeon had a new surgeon on staff, a Fellow that had arrived from training in Vail. So, that MD determined that yes, I did have FAI, but the bigger issue was dysplasia, and to go back to his partner, who was an expert in ASI hip replacements.

The ASI dr. provided care & I received 3 shots of cortisone over the next 14 mos. The first worked for 8.5 mos, the 2nd for 10 weeks, and the 3rd was ineffective, so I scheduled ASI/THR for the end of November.  I had several acquaintances ask if I would do HR, but was under the impression I was not a candidate, but unsure how I came to this conclusion.

My brother in CA happens to be good pals with Steve, a former lead engineer with Smith & Nephew, for 25+ years, and mentioned my situation to him. Steve called, and was insistent I reinvestigate HR, and asked for my x-rays, as he had skill in reading them.  His reply was that I would be a tough case, but a talented surgeon may be able to handle.  He also told me about Vicky Marlow, and contacted her for me. This was early October.

I had checked out one website for HR, but had not discovered Vicky’s, so I looked at it, then gave her a call that had to last an hour discussing why I needed to pursue this.  She had rec’d my x-rays from Steve and forwarded them to 3 of her top surgeons, and got replies, with reservations, that I would be a candidate.

I returned to my local surgeon for my scheduled pre-op visit, and asked him what he thought.  To his credit, he was remarkably neutral and said I should have a great outcome either way, discussed the merits of both, and said I had to be the one to decide.

I also had a 2 hr discussion over beers with my pal, the Biomet rep, and he intricately discussed what went on with both procedures, how the prosthetics worked in great detail, and the merits of his, the S&N, and other brands of  devices, understandably partial to his products, but also fairly discussed the advantages & features of the other brands.  Again, I was grateful for the information, and the fact he had more concern over having a good outcome than the brand of product I should consider.

With Vicky’s strong urging for HR still ringing in my ears despite my arguments with her about travel, the less invasive aspects of ASI, etc, a final discussion with her tilted me towards Dr Su, and the S&N device, as its failure history appeared to be lower.

I called Dr Su’s office toward the end of Oct, and they happened to have a cancellation for the day before Thanksgiving. I took it.  I submitted the paperwork, sent X-rays, and bought some pricey last minute holiday-week airline tickets. 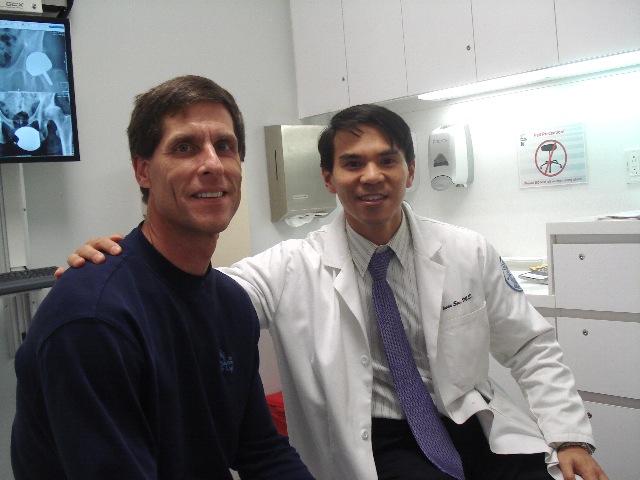 For the next few weeks, I was really anxious and even called Dr Su’s office several times to ask questions and if he really had ‘looked’ at my x-rays, since the earlier replies all came back that I was on the limit for HR.  They assured me he had.  My fear was I would show up and a final look would disqualify me, having made a trip for nothing.

I also called Mark from St. Louis a few days before my departure, who had just returned from NYC and he was great in suggesting where to stay, what to bring, what to expect, with other tips & tales from his experience.

I arrived 2 days before surgery, did all the pre-op stuff, and finally met Dr. Su.  He took new x-rays, and to my relief, these images suggested the dysplasia was actually not as severe as originally thought, so he had a high level of confidence.

During surgery, an unknown became known. I had nearly 40% dead bone, or necrosis, on top of my femoral head.  Dr. Su was able to complete the procedure, by filling in the removed area with cement and great skill. I know from his staff, and from Dr. Su himself, that most surgeons would not have been able to address that degree of bone loss, and would have had to switch to a standard hip replacement.   It was my good fortune to be in his hands, and that he was using a device that was engineered to use cement, and that I was able to get an early appt, as time was not my friend with the necrosis.

I’m day 9 post op, and have had the good fortune to thus far have suffered fairly minimal pain and swelling (except for last night, I had tried the exercise bike for no more than 3 easy minutes & had noticeable groin pain while sleeping).  I have a long ways to go, no doubt, but am only looking ahead to the months ahead when I can walk properly again, and as important (mentally), go hammer hard on/with my cycling pals. My main dread is now to await the treatment I get from the insurance company.

Thanks again to Vicky and her unbelievably generous work on the HR community, and for her help in my decision and in communicating with the MDs and opening some doors for me.  She and her site and this forum are remarkable assets, and not to use it to the fullest is only a disservice to yourself.